Are We Nearer To Catch and Release Than We Think? 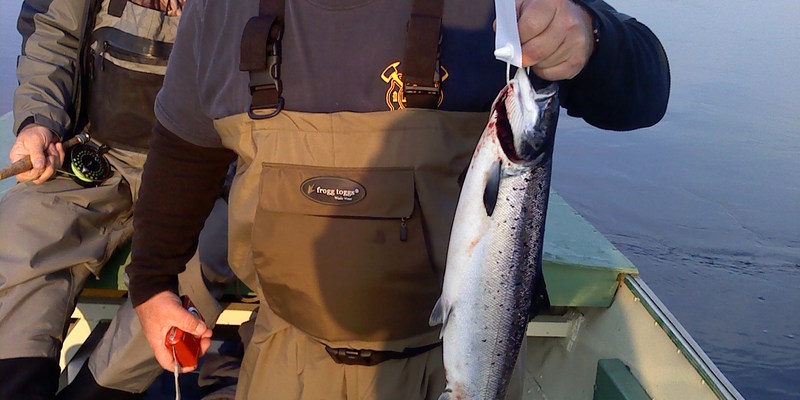 The Federal Department of Fisheries has again implemented catch and release of all atlantic salmon caught through angling in the Maritimes excluding Newfoundland for the second straight year, but don't be surprised if this doesn't get extended to include Newfoundland waters within the next year or two. Though the salmon resource in NL & Lab is doing much better than in NS and NB,there are still areas that are of concern, particularly those rivers on the South Coast of Insular Newfoundland and Southern Labrador. For example the various salmon zones in Newfoundland and Labrador are coded and assigned a grilse retention limit of zero fish (hook and release), two fish, four fish or six fish. There are still sections in the rivers throughout the zones that are closed to fishing or hook and release only, and one zone (Zone 5) has a one fish retention limit. This goes to show that although our salmon populations maybe healthier than those on the mainland we are far away from having an abundance of fish returning to all of our rivers on a consistent basis each and every year.

Federal Minister Tootoo says the decision is based on scientific analysis showing the lowest returns on record of Atlantic salmon in many rivers in the area.The extension is part of ongoing measures aimed at rebuilding stocks that have been on the decline for years.That includes the closure of the commercial fishery and tag reductions, the release of large salmon and catch-and-release measures for the recreational fishery.

The Atlantic Salmon Federation (ASF) is extremely disappointed that the North Atlantic Salmon Conservation Organization (NASCO) has been unable to stop factory sales of wild Atlantic salmon in Greenland and has also failed to put a limit on Greenland’s subsistence fishery. The salmon harvested in Greenland originate from rivers across eastern North America, where the vast majority of salmon populations are protected under federal species at risk legislation in Canada and the US.

When Canada raised objections to Greenland’s factory sales, the representative from Denmark reminded Canada that its harvest was six times greater than Greenland’s internal consumption of 20 tonnes per year.  “It’s easy to understand Greenland’s position because in Canada, anglers and members of the First Nations killed 135 tonnes of salmon in 2012, which is equivalent to 63,000 fish allowing 4.5lbs in weight for each fish. The Greenlanders are unwilling to continue to bear the burden and sacrifice of conserving salmon while other countries like Canada allow the killing of several times more salmon than they do”.

Through 2015-2017 Greenland has unilaterally committed to limit the total annual catch for all components of its Atlantic Salmon fishery to 45 tonnes per year. The amount of any over harvest in any year would be taken from the next years quota so that the total catch would equal 135 tonnes over a three year period. This represents just one third the annual quota harvested in Canada!!!

This move certainly puts pressure on Canada to reduce its annual harvest of Atlantic Salmon that is mainly caught by anglers through the retention of 63cm or less fish upon the salmons return to local inland rivers to spawn. If we are to reduce our annual consumption of wild Atlantic salmon there is only one place to cut and that’s on our inland rivers by implementing a catch and release only policy.

On Sunday August 6, 2017 the Department Of Fisheries is closing all atlantic salmon fishing in Newfoundland to hook and release only. This is due to the extremely low numbers of salmon returning to the rivers this year to spawn. The Department has been following the numbers closely since the season opened and now feel it's time to take action. To date no specific reason has been given to explain the low returns however the Atlantic Salmon Federation feels Greenland may hold some responsibility. In June of this year they urged the Federal Government to apply pressure on the country to reduce their catch of atlantic salmon as these are the very same fish that return to our rivers on a yearly basis.

The Ferderation reports that North American Altlantic Salmon returns were down by 27% compared to 2015 returns. The report indicated that grilse, which are salmon that return to rivers to spawn after one year at sea, were in the biggest decline and showed a 31% drop over the 2015.

Even though Greenland's harvest from 2015-2017 is set at 45 tonnes Canada harvests three times as much each year. The Federation feels that Canadians must now begin to practice what we preach and begin reducing the numbers of fish retained each year. If we expect them to stop killing fish then we all must be prepared to do the same.

My expectation is that this will not come easily and the fight to maintain the healthy numbers of atlantic salmon that we are used to in our rivers is just beginning. However the implementation of a hook and release only policy throughout our waters is where the Department maybe willing to start. I'll take a wait and see approach if that changes for the opening day of the 2018 season.