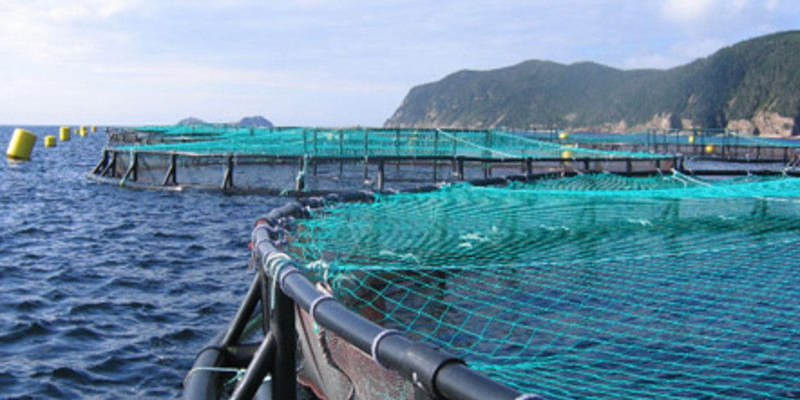 17 of 18 rivers studied had evidence of interbreeding

Research has confirmed that escaped farmed salmon are breeding with wild salmon and producing offspring in many rivers in Newfoundland.

"We did find evidence of successful breeding between farmed and wild salmon. Approximately a third of the individuals we sampled showed evidence of hybrid ancestry," said Department of Fisheries and Oceans scientist Ian Bradbury, of the unpublished study presented at an international aquaculture conference in St. John's on Tuesday.

Researchers studied thousands of fish in 18 rivers on the island's south coast, and found evidence of interbreeding in 17 of them.

"It was widespread across a suite of the rivers that we looked at. I think there was only one river where we didn't see evidence of hybridization," said Bradbury.

It's estimated that over the decades since the advent of aquaculture, more than 750,000 salmon have escaped from fish farms in the province. The new study sheds light on what happens to them in the wild.

Bradbury said while wild salmon populations in the rivers DFO studied are generally not thriving, the rivers with the fewest returns seemed to be the most vulnerable to farmed fish interbreeding.

"The consensus seems to be that the more interbreeding and introgression we see, the more population productivity goes down. So we do see an impact on population size," he said.

Bradbury added the research is still in its early phases "and we really need to better understand what these impacts are."

Studies in other aquaculture-intensive places, such as the Bay of Fundy in New Brunswick, along with areas in Norway and Scotland, have turned up similar results, Bradbury said.

"This is perhaps not unexpected."

DFO will continue its research in coming years, in an attempt to answer the study's outstanding questions.

"We want to look at how well these hybrids do," said Bradbury. "Do they survive? What are the impacts? Do they go to sea, do they come back?"

The study sends up red flags for organizations concerned about the future of wild salmon stocks.

"This is the first time that we have actually had confirmation that it is happening in Newfoundland," said Steve Sutton, with the Atlantic Salmon Federation.

Sutton added it also heightens the association's fears about the potential impact of Grieg Seafood's proposal to set up a massive aquaculture operation in Placentia Bay. The company has stated it will produce sterile fish that can't breed with wild salmon, but the ASF doubts that's possible.

"The process for making those fish sterile is not 100 per cent effective. They are going to be putting about seven million fish in the sea cages in Placentia Bay every year. So, some of those will not be sterile," said Sutton.

"Even if it is just one per cent that are not sterile, that's more than enough to do significant damage to wild fish in Placentia Bay," said Sutton.

The ASF also refutes Grieg Seafood's claim that fish won't be able to escape from the state-of-the-art sea cages it plans to use.

"We have never seen an aquaculture operation in the ocean that doesn't have escapees and no matter how hard they try, there will be escapees. It's inevitable," said Sutton.

The ASF fears those escapes will be a speed up the decline of wild salmon in this province.

"We have seen already in Newfoundland the entire south coast salmon populations have been assessed as threatened and aquaculture has been named as one of the threats to those populations. We've seen those populations decline and now we are finally starting to see the mechanism around those reductions