Luck Of The Draw 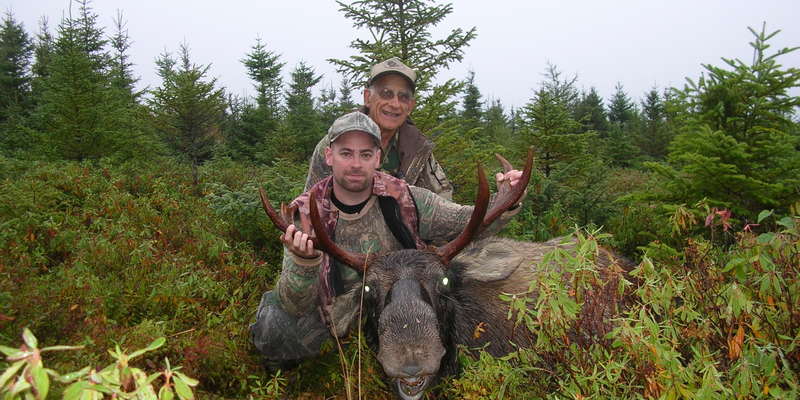 “Listen, listen” my guide and owner of Hinterland Outfitting Ltd. said to me. “Did you hear the snap of a branch just then”

“Not sure“ I replied.

“Bye I’m pretty sure I did, it seemed to me like it came from down that way” as he pointed to the left of our blind and downhill. “From now on no more talking, that’s a moose without doubt”

I kept looking in the direction Craig had indicated but could see nothing that gave me any indication a moose was hiding there. I listened as he was doing but nothing. My moose hunting guide stepped away from the blind and stood quietly behind a large white spruce tree about ten feet from us. This was only his second “call” of the evening and a moose was near already, it seemed too good to be true!

My uncle and I were here in Newfoundland on a moose hunting trip where I was hoping to take a mature bull moose with my bow. I also had brought along my rifle, but today as it was still only Wednesday, it was back at camp. My uncle Mike was my camera man. When I told him where I was going, he was more than willing to come along as a non-hunting guest. He and I were great friends and it was him who suggested he be the cameraman on the trip.

It was now Wednesday, our third day of hunting. We had observed a young bull the first thing Monday morning at a distance of about 25 yards, but it only had two small points, a spike bull. I could of easily have taken him but decided to hold out in hopes of seeing something bigger. Maybe on Friday I had thought to myself but not this morning. Tuesday we saw several caribou; some of which I could have taken as two of them were very nice stags and also we saw two more moose but unfortunately  we could not get close enough for a shot. Earlier this morning we hiked one of the nicest places I had ever seen for moose. We heard three or four of them calling and Craig had a bull responding for about half an hour but it failed to come in. Craig informed us that it already had cows with him and try as he might to get the bull to challenge him and come in, he could do nothing that worked. At about 10:30 am the moose simply walked away into the heavier green and we heard nothing afterward.

We had returned to camp a little after noon and over dinner discussed our evening strategy.

“I have a place that we can go and call” Craig said. “We will have to build a blind to get in cause the one I already have their won’t  work with a bow, it’s to closed in” he suggested.

“Sounds good to me” I eagerly replied. I was confident Craig knew what he was doing and I had full confidence in him, as did Mike.

“Let’s finish eating, have a short rest and then get going, we are going to make some noise making the blind so I want to have lots of time to let things settle down afterwards. If need be we can take turns napping in the blind if we get tired” he said with a grin.

It was now only 5 pm and Craig was sure he had heard a moose. Our blind, made out of young softwoods cut on site and stuck in the ground to form a crude U shape had been finished by 2:30 pm. Even though I had been listening I had not caught the noise that had alerted Craig. We waited watching him; but now both Mike and I  we were more alert. Suddenly a low moan came from down in the green and I knew instantly that it was a moose. Craig turned and gave us a thumb’s up sign. He came back to the blind and sat down. “I don’t expect much to happen until near dark” he explained. “It’s pretty open here and I don’t think a bull will come out into it until later” he whispered. “From now on absolutely no noise”

For the next 3 ½ hours out moose hunting guide called on que, several times per hour. On three different occasions we heard an animal move from right to left in front of us and back again, but always in the green about 20 yards or so. Once we briefly caught sight of the tip of its antlers as it moved between the brush.

“He will come, just wait until its dark enough for him” Craig advised. “I’m soon going to challenge him and see what he does anyway”

Shortly afterwards he picked up a shed antler he had been carrying with him all week and walked a short distance away to a young fir tree that a bull had already been scraping on. He slowly raked the antler up and down the tree breaking branches as he did. Instantly our bull responded with a grunt and it too began making noise with its antlers. Suddenly it stopped and the moose moved to our right but still in the green. I was shaking to say the least. Mike continued to film and I could tell by the look on his face he was as excited as I.

Then there it was for a split second. Craig pointed to a clearing between two young trees about 20 yards from the blind. “Get over there, he’s going to circle us. Get ready and take your time because he is going to be watching me”

I notched an arrow and did as I was told. I just got my feet planted when I could see him coming, just as Craig had said he would. He was out about 120 yards but heading in our direction. He walked in, his nose low to the ground with his antlers swaying.  I was now between Craig and the moose. Craig grunted and the bull stopped dead in his tracks looking to its right staring at Craig, fully side on to me.  I already had made full draw, so I took aim and let go the arrow. Jesus Christ all hell broke loose! The moose took off running at full gallop in the direction of Mike and the blind. I turned to see Mike bail at the last second as the bull flew by taking pieces of the blind with him in his antlers as he went. He was hit, that I was sure. The moose turned to the left and we could hear it galloping on the road we had walked in on. It suddenly turned again and we caught sight of it several times as it crashed through the woods, back the exact same way it had come in. We headed in the direction it had gone but failed to find any sign of it. When it was time to break out the flashlights Craig suggested we head to the road and take up the cause in the morning. A good idea I thought.

The next morning we arrived at daybreak and I was carrying my rifle. We picked up where we had left off the evening before and after searching for about an hour I finally spotted blood. I promptly called out to Craig and Mike and we began to track. If you think you are a good tracker I suggest you try your hand at it in Newfoundland and then reassess you opinion afterwards! Everywhere on the ground there was the color of red and now, eight hours later you had to feel each leaf to determine if it contained blood. Painstakingly we tracked the moose for about half a kilometer as it travelled in the ugliest terrain there was and with each step I wondered how could this be happening. We had measured the distance I had shot and it was only 17 yards. Craig said the moose had 15 antler points; not Alaskan but very respectable, a huge target none the less. I had been very confident when I shot that I had hit the vitals but now I was not so sure. We finally came to what Craig referred to as a “rut hole”, there was fresh sign all around and FRESH blood. The blood was the same color as we had been finding, dark red and we all concluded my aim had been off and most likely my wound was not life ending.

“There is no way those tracks weren’t made this morning and that means the moose has been here at this rut hole rutting, if it was a lung shot he would never have gotten this far and he would certainly not be in any mood to be rutting” Craig said.

Reluctantly I agreed and we headed back to camp. We hunted that evening but a cold rain moved in and we heard and saw nothing. Friday the rain continued but this time a strong wind was nearly blowing it sideways. We hunted never the less but it seemed the animals were holed up and none were moving.

Saturday morning we headed out to a new location with the weather having turned for the good. Hunting ended at noon, I was hopeful yet doubtful it was going to happen for me. We were walking along an old logging road heading into the wind and suddenly Craig pointed to the ground, “that’s fresh tracks” he said. The moose had crossed the road and was now somewhere ahead of us. I took my rifle off my shoulder and followed Craig. We hardly went 100 feet when the sound of rocks and flying gravel brought us to an instant stop.

“He’s over the bank” Craig cried.

I went to step up on the bank but before I could the moose sprang into full view about 10 feet away standing on top of the bank, it must not of had heard us coming and I guess jumped up to see what we were. I raised my rifle and fired, the moose never moved.

This time the moose bolted and we all reached the top of the bank just in time to see him falling about 15 yards away.

“Thank Jesus” Craig uttered. I never said it out aloud but I did also.

It turned out to be a seven pointer yet I was very thankful. A great ending to a fantastic week of hunting; I had had my chance at a larger moose but failed to capitalize on my chance and there was nobody to blame but myself. Craig my hunting guide had done his work. I would chalk this one down to experience.