Moose in decline in North America but not so in Newfoundland 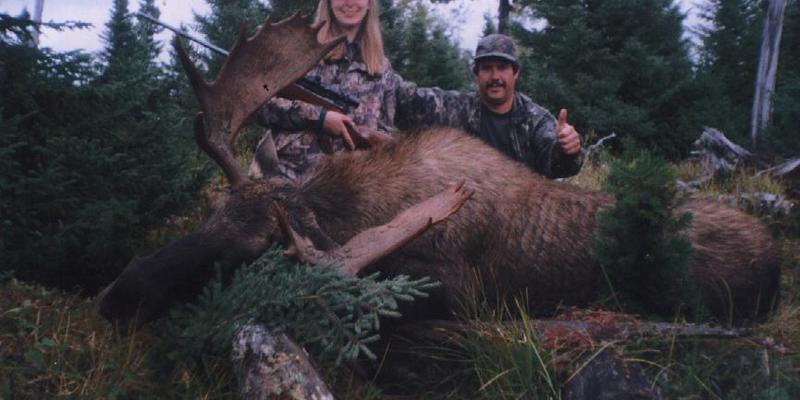 It appears that moose numbers are declining in many areas across North America but apparantly that's not the case in Newfoundland, Canada.

Portions of British Columbia have seen a decrease in numbers by up to 70% in areas of clear cut logging with harvest rates 50% of what they once were. Residents in many parts of BC report what they believe are declining numbers in moose populations also, a very good indicator of overall populations across the province. In addition to logging impacts, the BC government initiated a project looking into the vanishing moose, it will look at other aspects that could shed light on the cause of the decline such as hunting pressure, predators, parasites, diseases and climate change.

In Manitoba moose populations have also declined by as much as or more then 50% from 2006 levels indicating serious problems exists within those populations. No hunting zones now exist in vast areas of this province to ensure a future sustainable hunt.

In April of 2014 the Ontario Ministry of Natural Resources reduced moose quotas by 22% in Northwestern hunting areas and by a whopping 90% in both the Thunder Bay and Dryden Districts. Biologists are citing several causes that may be at fault including predation, hunting pressure, disease, parasites, thermal stress and also productivity – the number of calves born and survive each year. Biggest declines in moose numbers were observed in WMU No.8 in Dryden which saw a drop of 60% and WMU No.13 in Thunder Bay which saw a decrease of 13%.

South of the border in several US states moose numbers are fairing no better. In the state of Minnesota the 2013 entire hunting season was cancelled indefinitely due to drastic reduction in moose numbers. The DNR said that various reasons were in play to account for the alarming drop in numbers including ticks and hot summer weather. However it did state that hunting pressure was not believed to be a cause. An aerial survey estimated that just 2750 moose remained in the state, down 35% from the previous year and down 52% from 2010 levels.

Vermont has reduced its number of overall hunting licenses for the 2015 hunting season from 285 down to 225, a decrease of 21% from the previous year. Forty additional licenses will be issued to those hunters who wish to partake in bow hunting. Hunters are expected to harvest 30% of this quota.

In New Hampshire with moose populations also plummeting at an alarming rate, the New Hampshire Fish and Game commission may put a complete ban on moose hunting indefinitely. The issue is currently being debated by NHFG officials and local hunters, as the state tries to determine a management plan that will decide how many moose, hunters will be allowed to harvest between now and 2025.

Biologists are concerned that warm winters and hot summers have lead to an increase in parasites that are drastically affecting moose across the state. According to the NSF New Hampshire’s moose population has declined by more than 40% with total numbers falling from 7,500 to only 4,000 over the last decade and 64% of radio-collared moose calves died from tick infestations in 2014. Interaction with resident deer populations may also be having a devastating effect as deer carry a form of brain worm that is deadly to moose.

For now, NHFG is considering establishing regional population thresholds that could end moose hunts should the herds continue to decline. The state has been divided into several moose management units in order to monitor the herds carefully. Currently, both the Central and Southwestern Units have low numbers while the Northern Units maintains healthy herds. Within the densely populated Southeast, because of current conflicts with moose, officials are not proposing a regional cut-off.

There is some good news however, in Newfoundland, Canada’s most eastern province government increased the number of moose licenses issued to both resident and non-resident hunters by 1425 for the 2015-16 hunting season. A total of 32430 licenses are now available to hunters. The increase was approved by the government in response to an increase in motor vehicle and moose collisions occurring on the island. Some residents believe there may be other factors in play as ecologists on the island have been raising alarms over damage done to the forests ecology by these animals since their introduction in 1904. Many residents feel that the increase is not warranted and that numbers should be substantially decreased and not increased.