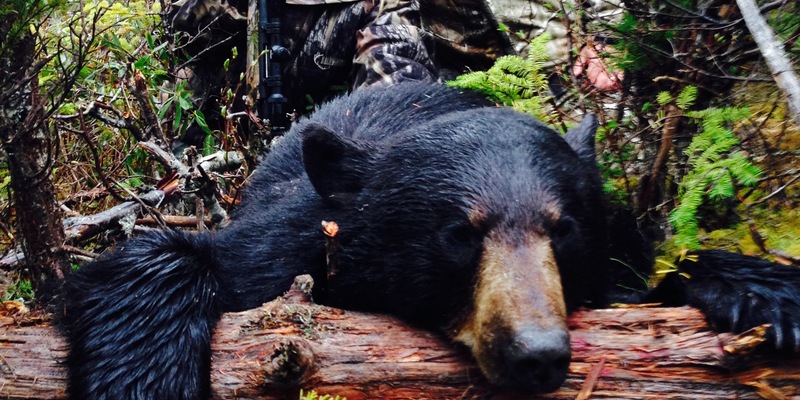 From the day we booked our bear hunt with Hinterland Outfitting, I knew I'd picked the right black bear outfitter.  In the months leading up to our trip, Craig remained in contact answering all of my questions regardless of how simple they were.  After landing in Gander, we quickly met up with Craig and Alice whom we'd spend the next week with.  We had great, funny, conversation along the 2 1/2hr ride to camp.  The last leg of the trip was a short ride on quads down a hand-cut trail through the bush. By the time we arrived at camp Kaycee and I already felt like family.

The remote lakeside camp is big enough to be very comfortable without losing that remote camp feeling.  Private bedrooms, comfy beds, full kitchen, full bath, wood burning stove, and satellite TV makes camp time very nice.  Over the course of the next 6 days Alice prepared incredible meals, including a daily special fresh/hot second breakfast for my late sleeping daughter.  Kaycee and I went out daily on quads with Craig to bait up barrels for the following days' hunt, which frequently brought sightings of caribou and moose.  Hunting stands were authentic ladder stands made from trees in that area, and very safe/stable.

Our first evening the weather was unfavorable, cold, windy and showers. However Craig brought us to “Gravel Pit” and we braved the elements until just before dark and then made a quick departure back to the roadside where our hunting guide and big game outfitter Craig was waiting for us. On Tuesday, with the wind now blowing in a different direction we changed stands so that that the wind was more or less blowing from the bait site into our faces. Again we arrived at the new stand called “Rocking Horse” on the ATV between 3pm and 4pm, quickly and quietly got up into the stand while our black bear outfitter filled the bait barrel which had been tipped over since yesterday with bread, sweets and used cooking oil. Craig finished filling the barrel and giving us a “thumbs up”, started his ATV and returned the way we had came in. Silently we waited, watching every movement around us for some sign of an approaching black bear. Then there it was at the bait barrel, making no noise on its approach, a ghost in the forest. It surveyed its surrounding lifting its nose in the air smelling and looking at the openings around the site then ever so gently placed its paw on the top of the barrel and pushed it over. Kaycee quietly raised her gun into position and as the bear sat feeding, totally unaware of our presence, she eased the safety off took careful aim and squeezed the trigger. The black bear rolled gained its footing and tried to run obviously in serious trouble. We phoned our big game outfitter and guide Craig to inform him of our situation, he advised us to stay put and that he would be with us in a few minutes. Hearing the ATV approach we got down out of our hunting stand and retold our story to Craig. We walked up to the barrel and out the trail the black bear used to escape. To our relief within minutes we heard Craig shout out, “I’ve found it it’s over here”. It was a beautiful black bear sow in the 200lb class, not huge by Newfoundland black bear standards but beautiful, a perfectly tanned muzzle and white vee on its chest. We loaded the black bear into a cart our outfitter had brought along behind the ATV and once back at camp, Craig made quick work of skinning and packaging the meat taking time to show us where the bullet had hit, right through the heart.

The next evening we returned to “Gravel Pit” the stand we had hunted Monday evening and had the opportunity to see two more bears but as we had already harvested one bear we were looking for a much larger black bear and decided to pass on both bears. Thursday came and we decided to hunt out of “Rocking Horse” the same blind we had already harvested our bear off of. Out black bear outfitter Craig had showed us signs from a much larger black bear then the one we had taken when baiting on Monday. He had told us that there were several black bears visiting this site and one of them was definitely large. As we neared the site both Kaycee and I could see that the barrel had been tipped over again. With the procedures now down pat, we quickly got into our stand and Craig replenished the barrel then departed. We did not have to wait long, suddenly movement from behind the barrel, an outline and there it was sitting in the open by the barrel, its nose lifted upwards towards the sky smelling. It was obvious this was a much larger black bear then the one we had harvested a definite shooter. It waited for what seemed an eternity before approaching the drum and with one swipe of its huge paw flipped the barrel on its side with its bottom nearly pointing directly at us. Cautiously it began to feed lying on its belly with its head and eyes pointing right in our direction. Kaycee eased her gun into position and waited for a shot. Suddenly the black bear raised itself into a sitting position still facing us, this was as good as shot as ever. BOOM! The black bear fell over backwards and pawing at the earth jumped to its feet and ran straight for us, about twenty five feet in front of our stand it turned to its right and crashed through the underbrush out of sight. We quickly phoned our black bear outfitter to give him the news. Craig arrived and with flashlights we began our search. We looked for over an hour with no luck and with the darkness and dense brush we decided to call off our search until the next morning. Sadly we searched from daylight till eleven pm with no signs of the huge black bear, no blood and no hair. We wrote it down to nerves and bad luck it was a clean miss.

We hunted Friday evening but the weather had again turned for the worse and we saw no black bears. While we hated to leave camp, on our last day in Newfoundland, Kaycee and I headed to Twillingate to visit iceberg alley, we were not disappointed.  I cannot say enough good things about this trip, this hunt, or this family.  Craig and Alice do outfitting the way it's supposed to be done, and we plan on returning as soon as possible.