The following is some interesting facts I found while surfing the web. The majority of the observations are documented and come from studies undertaken.

An adult moose has two layers of fur. The long hollow outer hair is called guard hair and underneath is a dense undercoat of woolly fur, used for warmth that allows these animals to easily withstand extremely cold winter temperatures. This is mainly due to the fact that the guard hairs grow considerably longer for the winter months. This top layer of guard hairs covers the entire body of the moose including its face and legs while the wooly fur is only found on the body. Guard hairs are also hollow and hold air. This helps moose stay afloat when swimming.

While calves begin to feel the cold at -30 degrees C the adults fare much better. Their winter coat of fur makes them so well insulated from the cold that winter temperatures of -5 degrees C is so warm for them that it can make them pant! With winter temperatures now measuring a lot warmer on average than in years gone by, the increase in temperatures can cause unwanted stress for the animals for longer periods of time. 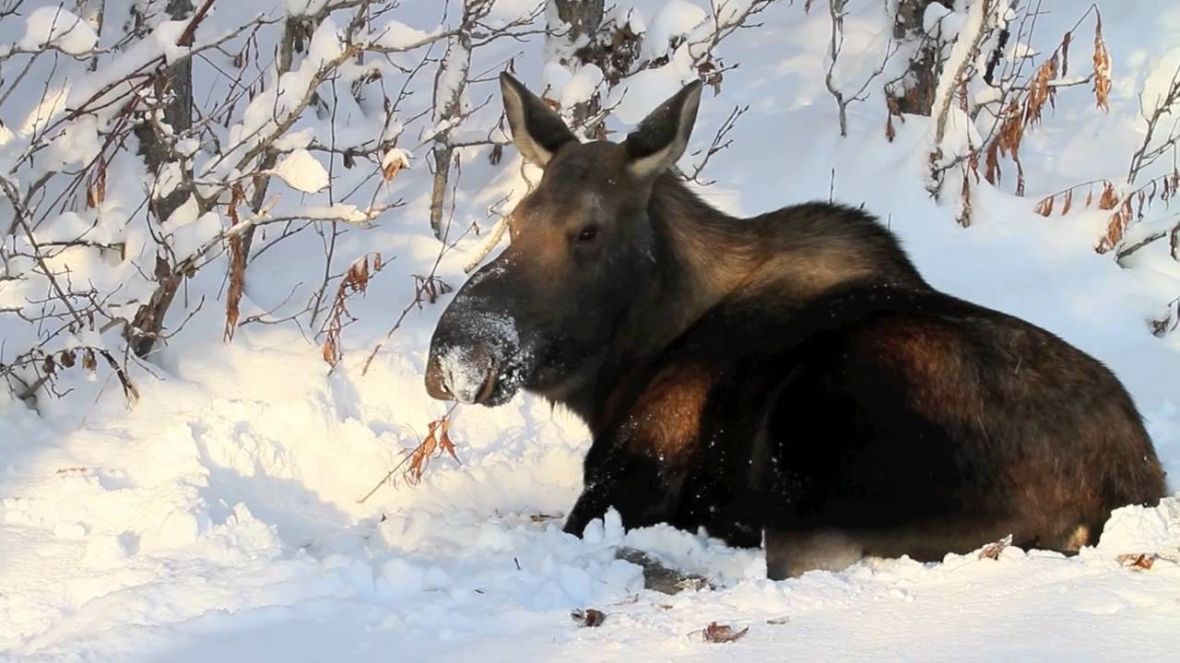 On any warm winter day Newfoundland moose may actually leave open areas to access areas with greater amounts of shade especially during days of direct sunlight. These are usually areas of mature softwood. Some moose may even lie flat on the snow to dissipate the unwanted build up of body heat through their belly where insulating hair is less dense.

Availability of good winter habitat is very important in keeping a moose population sustained. Ideally they need to winter in areas with less than three feet of snow with an abundant feed source close by. They will lick snow to obtain water when necessary.

In areas of high snow accumulation moose will gather in groups or “yard up” where a stable food supply is found. It is said that they instinctively keep moving during storms to keep trails beaten but maybe it’s that they are just up feeding during these times thus keeping trails open. For most moose winter is a period of energy conservation and limited daily movement.

Unusually heavy snow conditions can cause high mortality in moose populations especially if it begins to accumulate early in the season before animals have had a chance to replace fat reserves lost during the breeding season. Most mortality occurs during the spring and not during the dead of winter because it is at this time they are most vulnerable. The body fat of most moose in these cases has been depleted over the winter and they are now left in a weakened state; unable to forage for food outside their winter habitat and not strong enough to wait for new spring growth, they simply die of starvation.

Moose are not fond of hot sunny summer days. During periods of high temperatures moose will cease to forage and instead seek shelter and rest in an effort to remain cool. Summer temperatures starting as low as 14 degrees C can begin to cause heat stress and moose will begin panting at 20 degrees C. Heat stress is felt more acutely by adults than by younger animals due to their larger body mass. During these periods water or wet areas are used to control high body temperatures if required. The shade provided by alders is also a favorite place and the fact that these shrubs like to grow in wet areas probable further entices them to these sites. 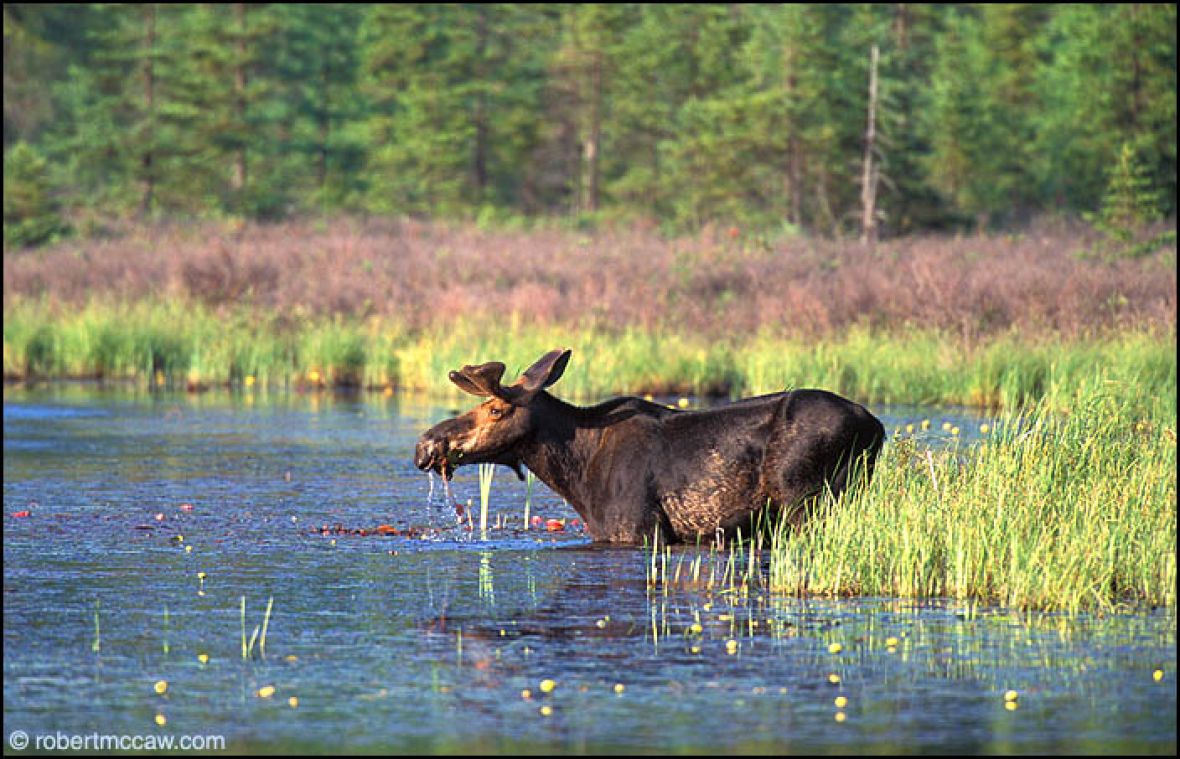 The stomach of a moose is similar to that of domestic cattle. They are called “ruminants” because they have a four part stomach. After feeding, moose must bed down for approximately 10 hours per day to digest their food. They return partially digested food from their stomach to their mouths for additional chewing in order to further break down the food. It’s called “chewing the cud”.

Food is “chewed” using molars located on the bottom jawbone and the thick flesh located on the top. They have no top teeth. The stomach of a moose can hold upwards of 100lbs of food at one time. As the quality of food declines in the late fall and winter the number of hours needed for digestion increases pre-empting the amount of time available for actual feeding. Moose do not feed as much in the winter months reducing their intake by up to 50%. This is due to both a longer rumen retention time of the lower quality browse and an apparent voluntary reduction of food intake.

Moose can dive in water for aquatic plants; however they are not suited for this activity due to the natural floatation of their hair. When required however, they will dive and can stay underwater for a considerable length ot time. 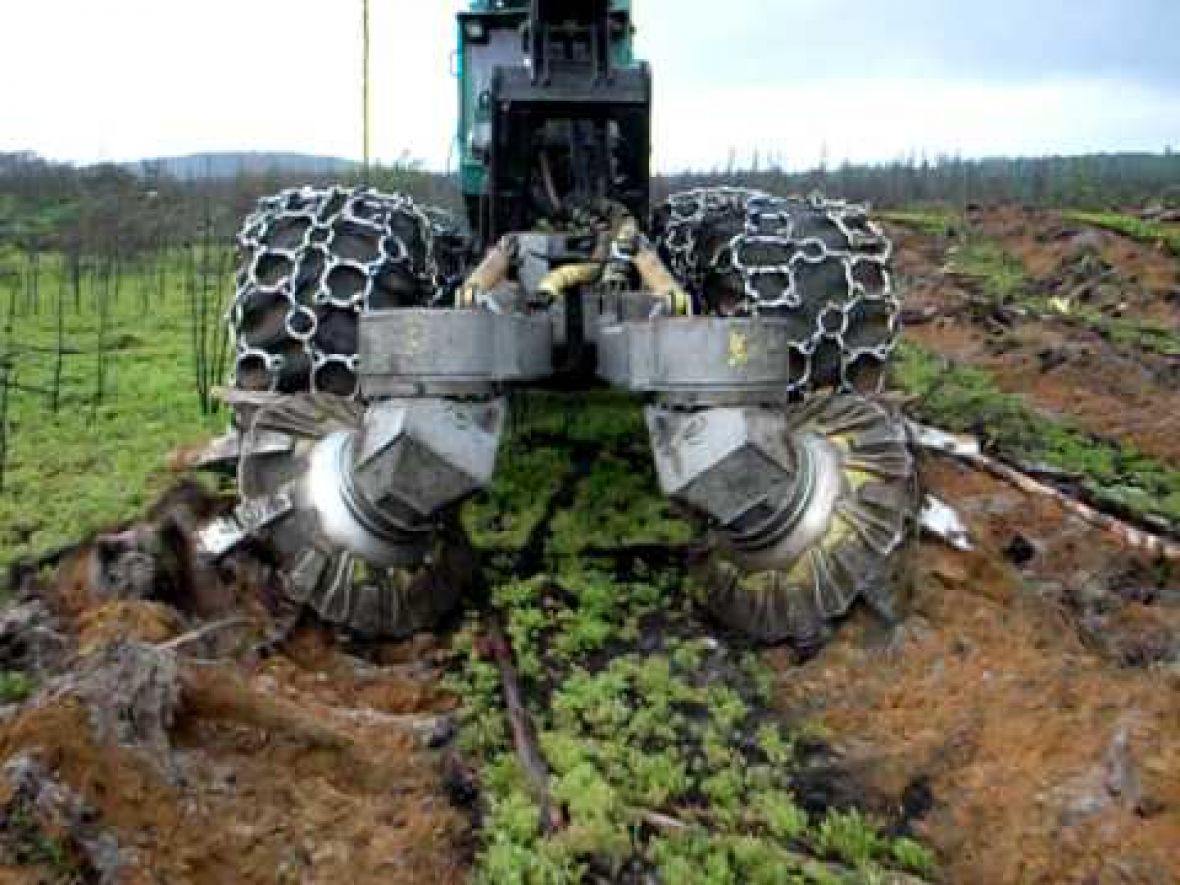 The forestry practice of accelerating the passage of logging clear cuts through the re-planting of Black or White Spruce without allowing for the successional stages of pioneer species to run its course and targeting moose forage areas with pre-commercial thinning, has the greatest negative impact for moose in these locations.

This is a very common practice now exhibited by the forestry division in Newfoundland as cutovers are usually scarified and planted within two years of harvesting to prevent undesirable species from becoming established! 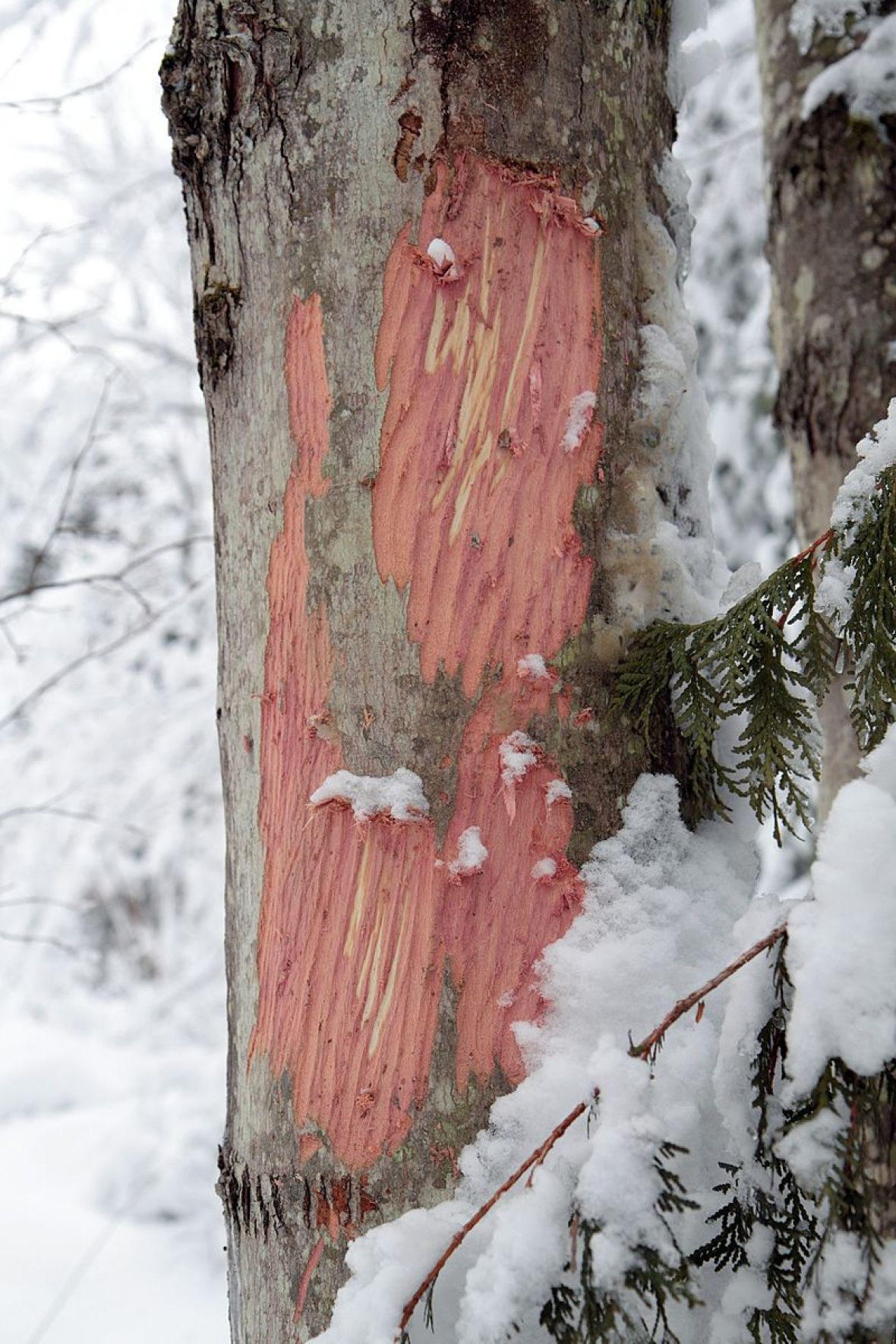 A male newfoundland moose grows and sheds its antlers each year, they are not horns as they are often referred to which remain in place throughout an animal’s life. They are the fastest type of growing bone known on earth. Some antlers can reach 25 kilograms in weight in just five months of growing.

Moose begin to grow antlers in April and they continue to grow until August at which time the velvet is shed and the antlers are considered as “hardened off”. Beginning in December the larger bulls begin to shed their antlers while the younger animals may retain theirs as late as March the following year. 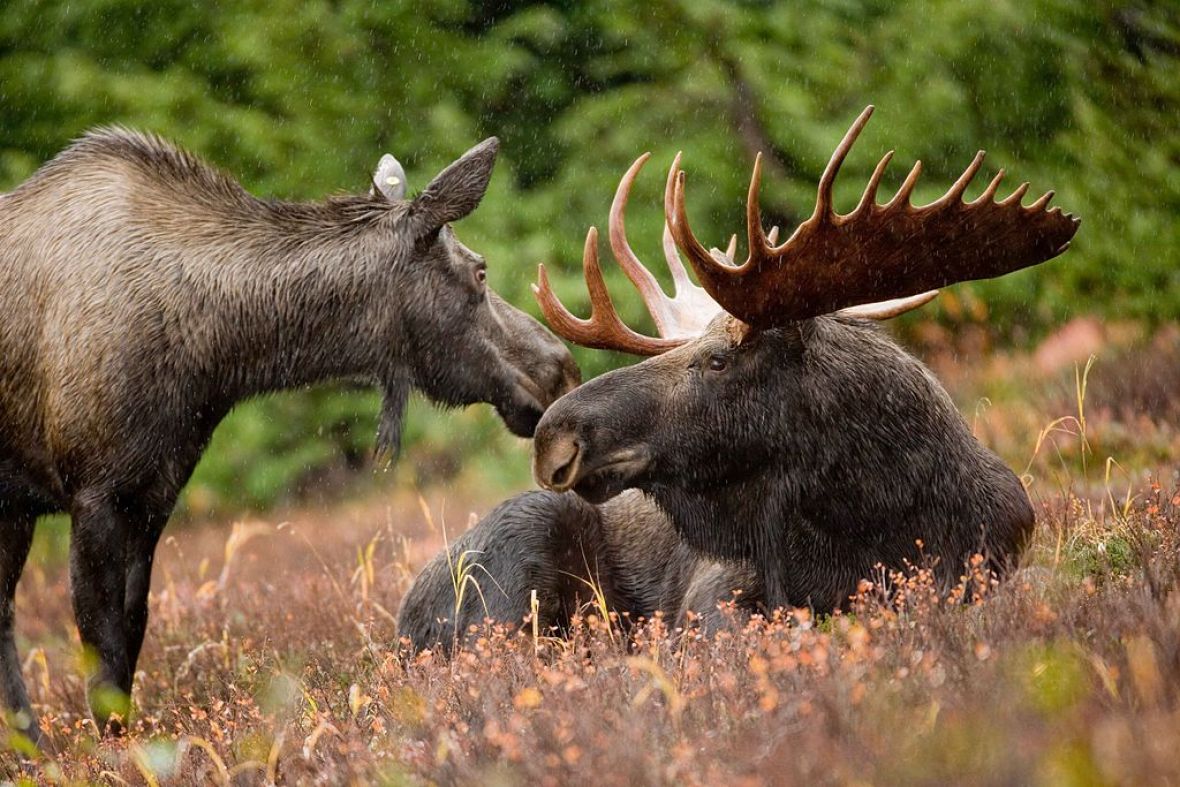 The breeding season or “rut” occurs from mid-September through mid-October and is amazingly synchronous across all of North America. The receptive period of a cow moose lasts from one hour to three days. Cows that are not bred may come back into heat every 28 days for as many as six consecutive estrous cycles. However, breeding that takes place after the first rut often times results in calves that are not large enough in the fall to make it through the winter. Cows breed for the first time at 1.5 years of age having their first calf at age 2.

Most Newfoundland moose don’t live beyond 15 years of age and anything over 7 years is considered old. Many animals begin showing signs of joint disease at this time especially in the hips and lower back. At this age their teeth have also severely deteriorated preventing the animals from consuming the proper amounts of food.

Check back again I will be adding to this page as time allows!!!