Perseverance During Adversity Pays Off! 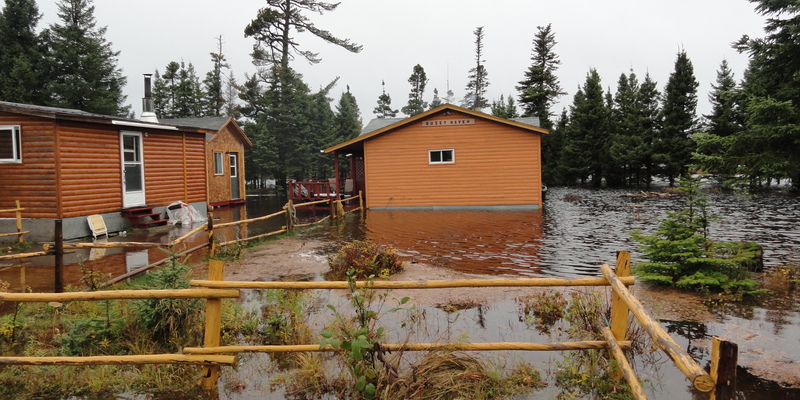 On October 10th -11th  2016 a so called Thanks Giving rainstorm soaked the island of Newfoundland from east to west with torrential rainfalls, some areas like Burgeo received as much as 263mm. Grand Falls/ Windsor received 181mm. while Gander received 177mm. The water level of streams , rivers and ponds in many areas flooded to levels never witnessed before by residents and in doing so washed away strategic infrastructure like roads, culverts and bridges.

Many communities became isolated as roads going into their respective locations became impassable due to localized washouts and or flooding. No less than ten major road networks were out of commission until repairs could be accomplished. Galvanized and plastic culverts used in road construction were still being made at the local plant in Bishop’s Falls mid-January 2017 to repair the damage, a full three months after the storm. The plant usually scales back production in November.

At our lodge, where we were hunting with clients from the United States, water levels rose to heights that I have not seen in my near thirty years in the area. Although it rained like never before it never stopped us from persevering. On Monday morning we harvested a12 point bull moose and had it extracted just before the skies broke completely open. It rained heavy the rest of the day and all night. 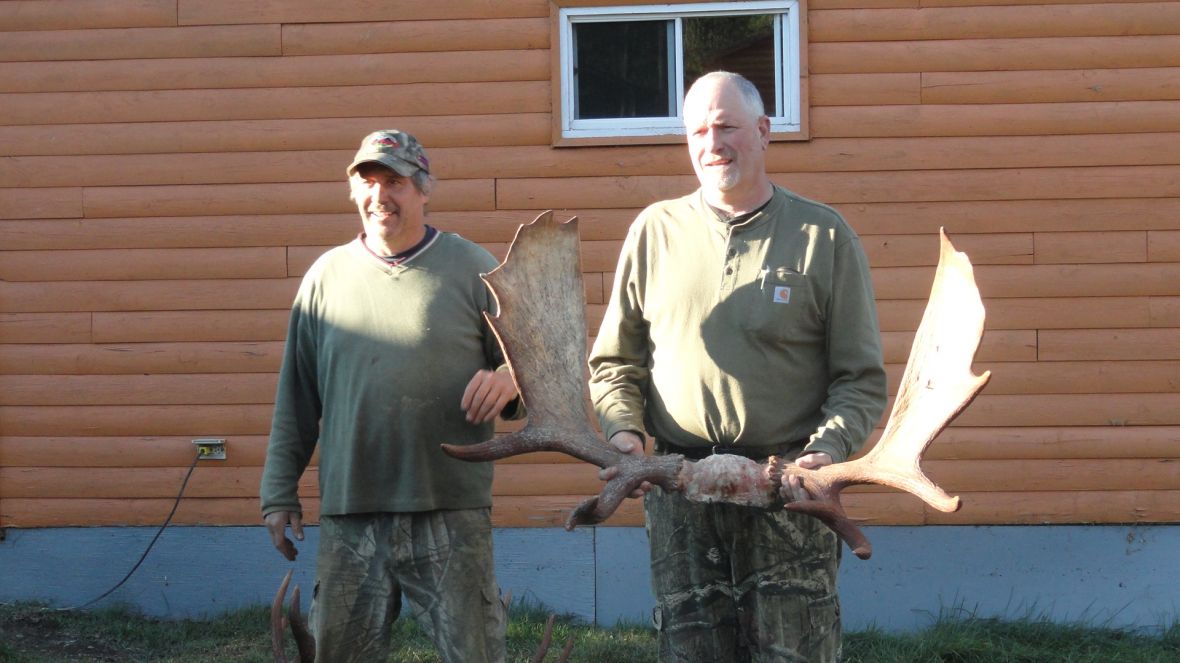 Tuesday morning we awoke to a worrysome sight. Water levels in the lake on whose shores our lodge was located on had begun overflowing the natural four foot high banks sending water inland towards our lodge and out buildings. Breakfast was eaten mostly in silence as nobody knew what was in store for us. Having to call an end to the hunting and evacuation was a serious possibility and it weighed heavily on everybodies mind. However, at Hinterland Outfitting we had bared the brunt of previous rainstorms and had never quit hunting before. A constant looking through the windows watching the waters slowly rise kept these thoughts in the forefront of our minds.

Regardless, a decision was made among the owner, guides and hunters that we were at the mercy of Mother Nature herself and with that be dammed, we would go hunting come “hell or high water”, high water was a for sure, “hell” we would take a wait and see approach! Unsure of the conditions in the field guides and hunters left to go hunting in pairs at daylight, just in case of emergency. Apparently the moose were not impressed with the weather either as only one moose was harvested that morning, a seven pointer.  By 10am water had reached and surrounded our main lodge. It peaked shortly afterwards but not before it deposited approximately three inches of water on the floor throughout our main lodge and giving the building the impression it had been built in the middle of the lake. 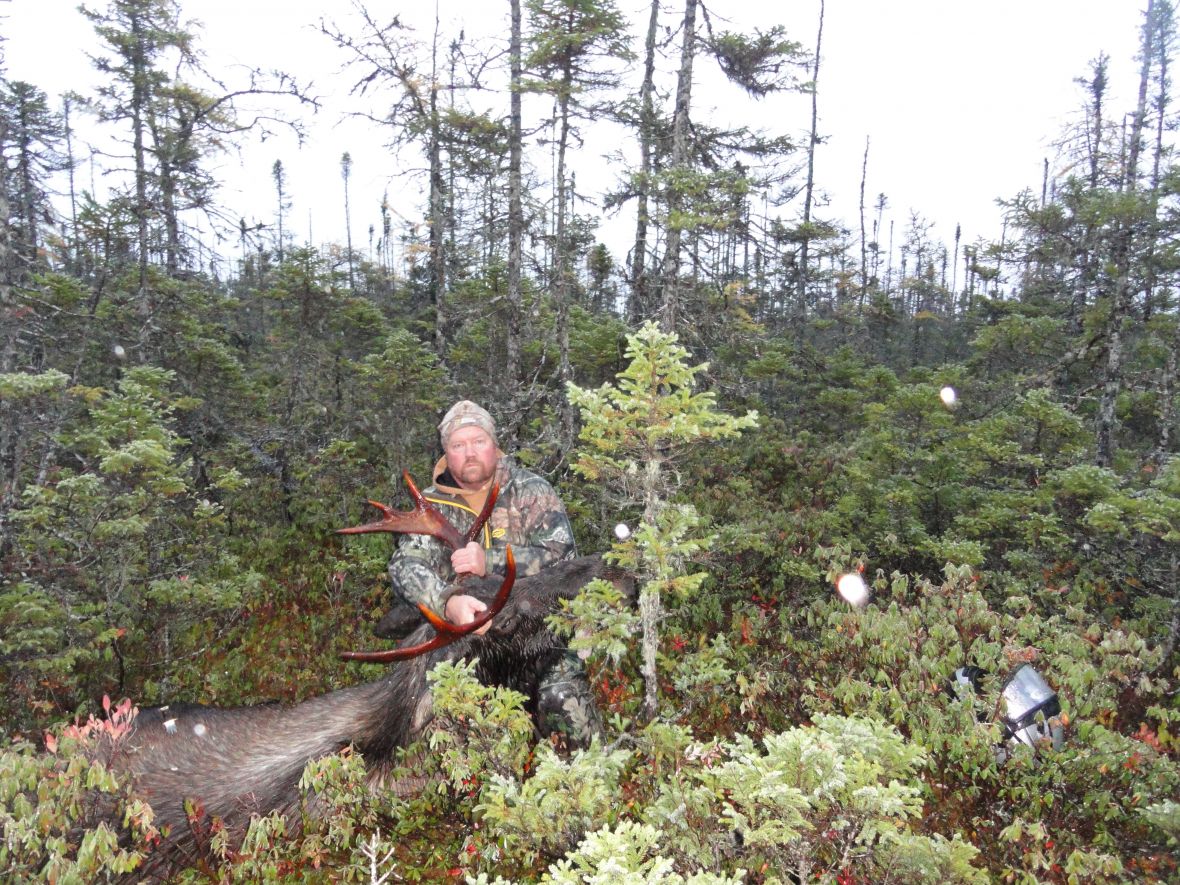 Alice, our cook made turkey sandwiches and tea for dinner which most of us ate with our rubber boots on at the kitchen table. Once everybody was finished and with the notion there was nothing we could do, we all moved over to our guide facility which had been unaffected by the water, it was crowded but better still it was both dry and hot.

Our generating and storage facilities were also affected with nearly twelve inches of water in both. Not knowing what the conditions were to evacuate camp if necessary and call a stop to the hunting a decision was made to contact a fellow Newfoundlander named Peter Parsons, who owned a private camp nearby to ask permission to use his camp if required. Without hesitation permission was given and we were told to move in and make ourselves at home, for which we were all extremely grateful and still are!

However about two hours after the water peaked, water levels began to drop as fast as they came up and by 6pm we had literally “swept” all of the water from the main lodge and had the woodstove blazing again. Within hours the floors throughout the lodge were completely dry and we began placing furniture and things back on the floor. Water in the generating shed was still a couple of inches high on the floor but power was required so I flipped the switch and sure enough the diesel turned right over and fired up, a very welcoming sound. A “water boil order” was in place but we were back in business none the less.

We awoke early Wednesday morning and the water levels had diminished further by about eighteen inches, a welcoming sight. However several rivers and streams located on our road system were still swollen to levels that made them impassable by either ATV or vehicle. Regardless the four hunters that still had not tagged out left and went hunting at daybreak. It proved a good idea as a twelve point bull moose was harvested while several other moose were seen. That evening the hunters and their respective guides hunted until dark but to no avail.

The following morning, Thursday the weather turned more favorable with clear skies and light winds. Thinking it was probably still no use in hunting bogs or near waterways our guides decided to stay to much dryer grounds while hunting and another bull was taken, it was a sixteen pointer. They also saw three other moose nearby, one of which was a another large bull. 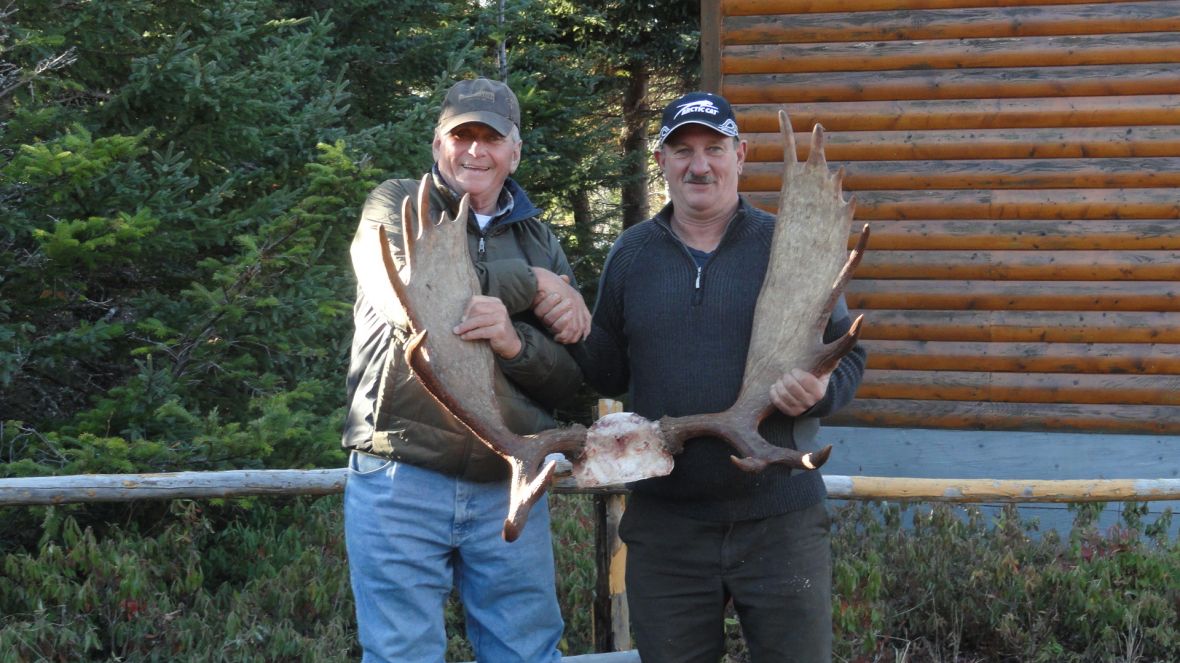 The next morning while our remaining hunters were out hunting a scouting trip was arranged to gain firsthand knowledge of the road system that was our access to home. Allowing our hunters a couple of hours headstart we departed. We hadn't travelled far when we could see an ATV parked in the road. It was one of our guides and his hunter and they were just off of the road cleaning another moose. It was a ten point bull but its antlers were damaged on one side, its left side was nearly completely broken off presumably in a fight with another larger bull. At noon while eating lunch one of our guides noticed a yearling moose standing behind our skinning facility, it was a bull. Our remaining hunter viewed it through his scope several times but at the end decided to pass on him. It fed for about twenty minutes oblivious to the noise of our generator and it spectators before quitly walking away along the ponds edge. 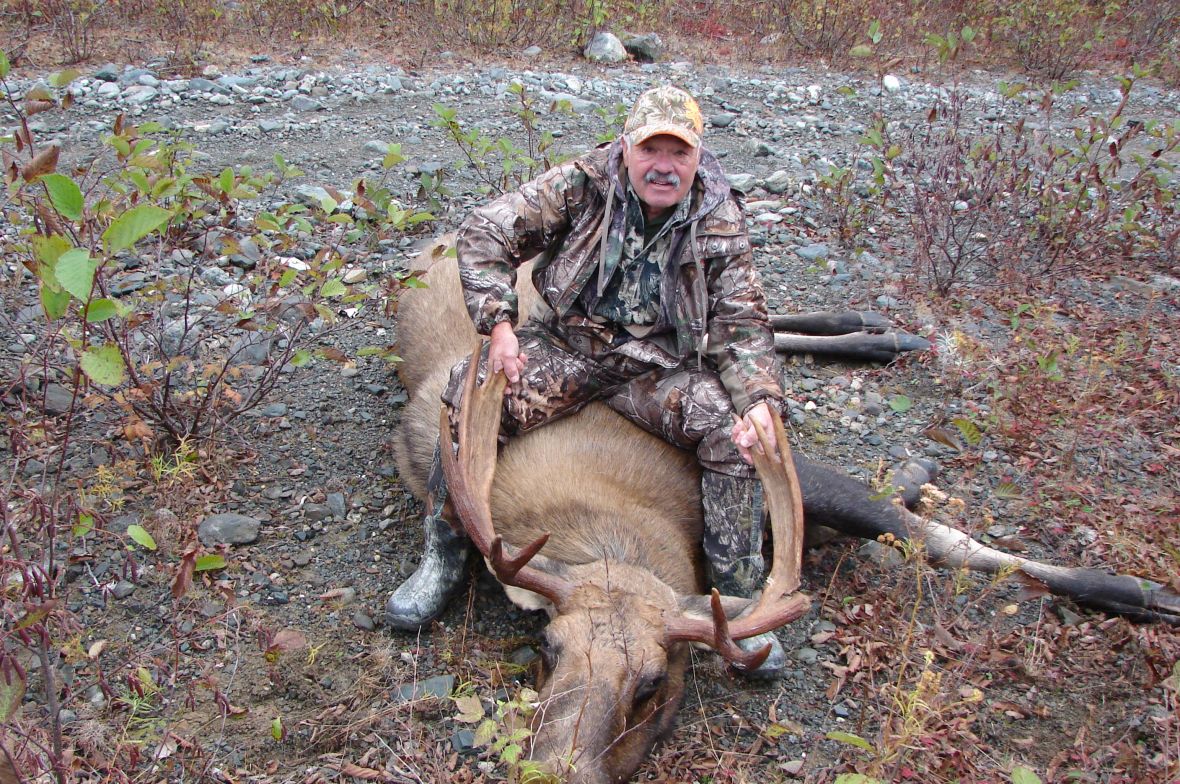 By noon we had travelled enough of the road system that we were confident, with a little work on a bridge we had installed earlier that summer, we could break camp safely and on schedule. Work on the bridge was completed that evening with great manual help from our hunting guests and our John Deere 310 rubbertire backhoe. In order to do the damage to the bridge it was estimated the normally small brook had risen about eight feet! 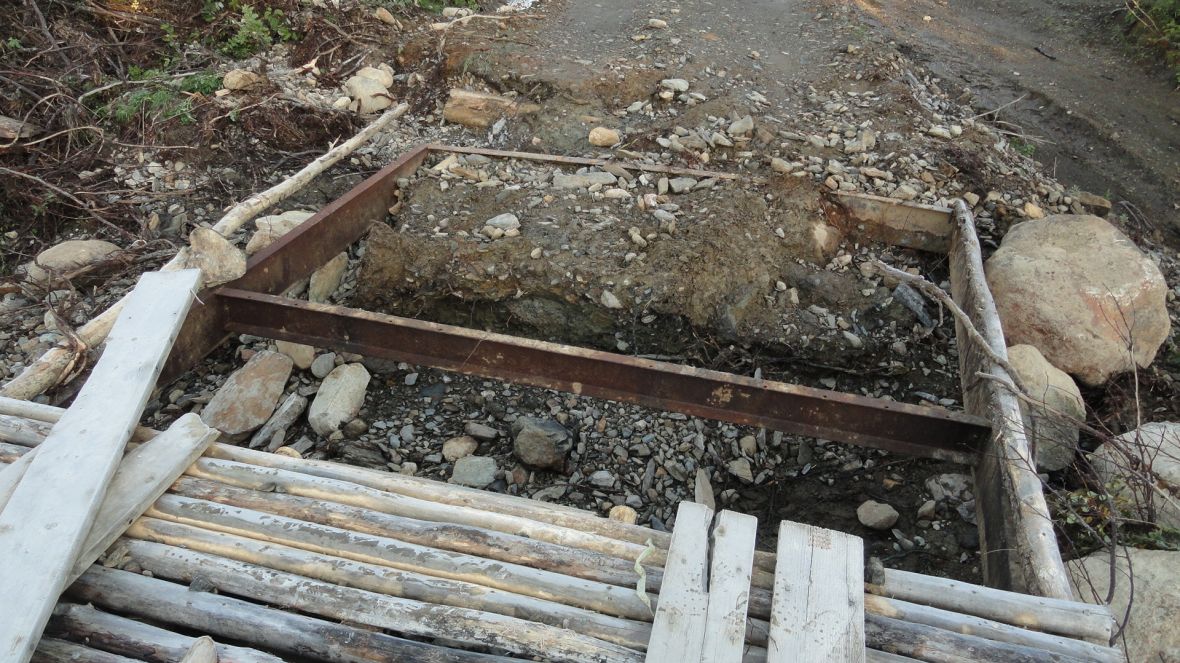 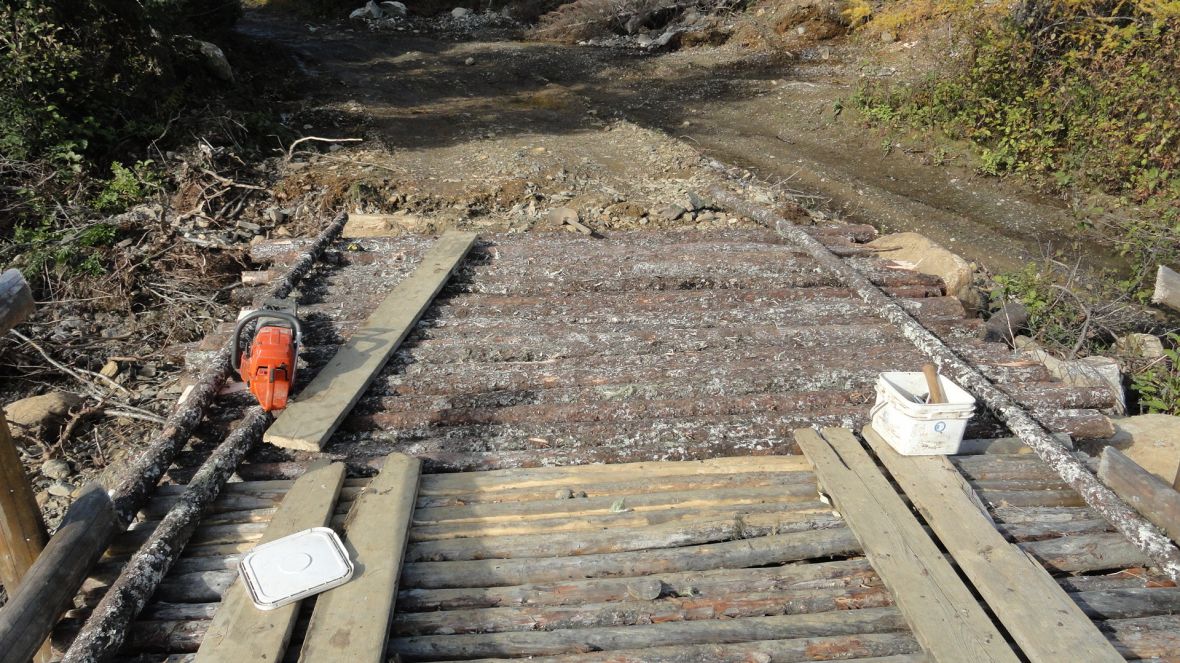 We broke camp shortly after noon on Saturday the 15th of October. The trip back to the blacktop showed the full extent of the rain storm and the damage it had caused in the Northwest Gander area, just about every water crossing on the main road leading out had washed out but lucky for us just enough repairs had been made to allow traffic through. Full repair costs will probably run in the millions and take months if not years to complete to bring the road system back to normal. Several major bridges on the road system were condemned and had/ have to be replaced. 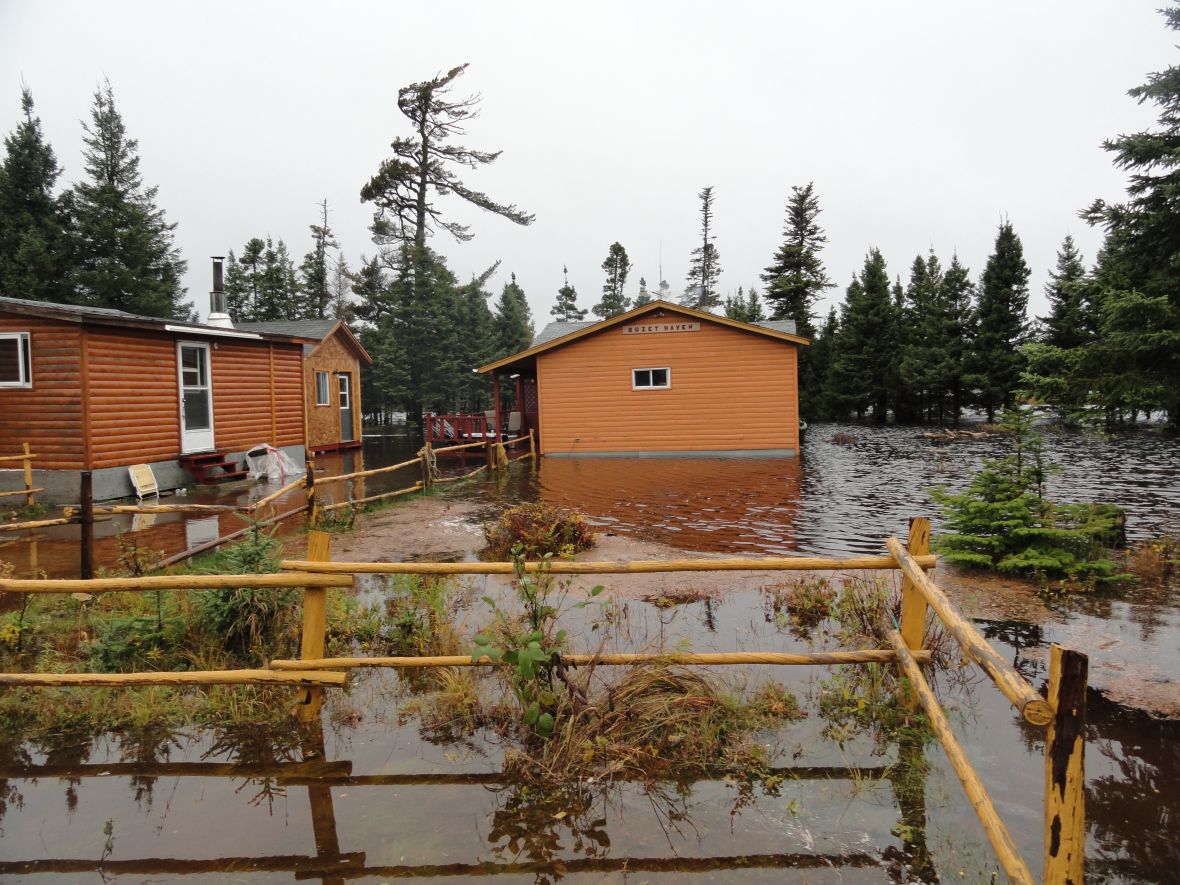