The Best Black Bear Hunting Day Of My Life 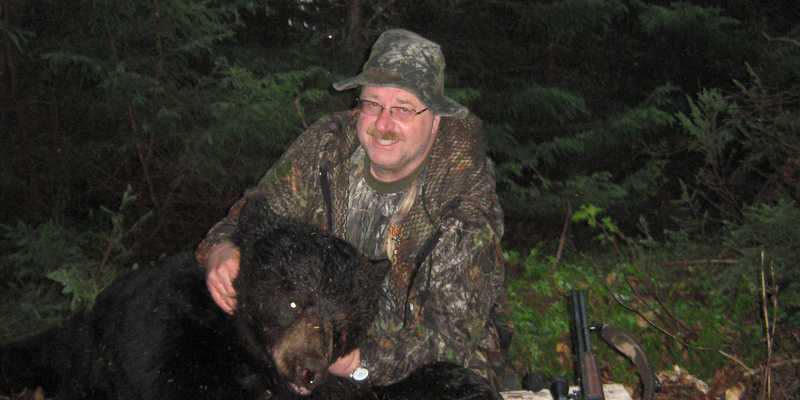 Someone I once knew said that "When bad things happen, they happen fast." This could also be said for good things. The best black bear hunting day of my life happened during the last week of June in 2010. Craig had placed me at (Wrong Rd.) in a ground blind about 50 yards from a 45 gallon barrel filled with chicken by-products topped with bread saturated in bacon grease. I remember that day, because it was cloudy and there was a slight drizzle with the wind blowing towards me. Even the black flies and the no-see-ums, which always seemed to be relentless at this time of year, tapered away somewhat. I was ready with all my hunting gear, wearing my Scent-Lok clothing, rubber boots, and a bug proof jacket. I sat with my Marlin lever action 45/70 cradled across my lap.

At about 6 pm, from the right hand side of the woods I saw my first black bear of the evening. He cautiously approached the barrel, his movements very skittish. He looked to be about 200 pounds or so, and as quickly as he appeared he disappeared back into the woods. Then another bigger black bear emerged from the brush and started moving towards the barrel. This bear was also cautious, but easily knocked the barrel down and began to eat. I watched him carefully through my Leupold rifle scope. This bear did not remain still and slowly backed into the brush. I felt as if he was looking in my direction, and perhaps he was, because he refused to eat in the open by the fallen bait barrel. Instead he would scoop up the bait and retire behind the brush where I could clearly see his head. Of course, my adrenalin was pumping, and I had to take several deep breaths to relax. It was then that I decided to carefully place my rifle on my bipod for a rest. I watched his head through the crosshairs, I breathed out halfway and pulled the trigger. Choosing a head shot on a black bear, goes against orthodox thinking, and for good reason - too much can go wrong and all black bear outfitters will tell you so. However aided by the shooting sticks, and the 26 inch barrel of the 45/70 my shot was true and I hit the bear right in the forehead. He rolled out of the brush, and with his back sideways against the barrel he began his death moan. I fired again hitting him in the chest with a Remington 405 grain bullet. I was elated again as I had another successful hunt in Newfoundland.

Certain that I was done bear hunting for the evening, I called my wife first to share my good news with her and then my outfitter and guide Craig on my satellite phone to share the good news. When we were done talking, I settled down again and remained still and quiet waiting for my hunting outfitter who had been waiting to pick me up at dark about a half a mile away. To my surprise about a half hour later, I saw the branches behind the barrel begin to shake back and forth. Having never seen this, I was surprised thinking it was probably the smaller black bear I had watched earlier returning, but I was stunned when I saw a large black bear appear, and he began to paw at the bear I killed. I believe he did not understand why the dead black bear was not running away. As he investigated the fallen bear, he presented a perfect broadside shot. Knowing that my outfitter had a two bear policy I decided to shoot, putting the crosshairs behind his forward shoulder, I fired at him. To my surprise he did not move at all, but his entire body shuddered. I quickly fired a second shot, and again I heard the bullet hit home. The bear fell, but quickly regained his footing and slowly walked into the woods behind the barrel and was out of sight. When Craig arrived, with flashlights we found the second bear about 15 yards from where I shot him. I touched him on the eye with my rifle to be sure he was dead. To my great relief he was. Killing two large black bears within 40 minutes of each other, was a tremendous achievement for me. Of course, without Craig as a guide and big game outfitter, I never would have had this rare opportunity. Will this success ever repeat itself ? I don’t know, and I certainly wouldn’t bet the ranch on it. However, it is experiences like these that define us as hunters and teach us to reflect about a sport that we love and cannot give up.