The success of most black bear hunts over bait, and through an outfitter, is often decided well before the hunter arrives at camp. Your guide or outfitter should be doing all of the work like placing the bait barrel in the most strategic place possible where wary black bears will feel comfortable enough to feed, and of course, your guide must also refresh that bait barrel often to keep bears interested. Usually a scrupulous guide will keep a written record of when different bait sites are first hit and how often thereafter, what type of and how much food is placed back in the barrel and record any indication of what sex, what trails are used, what numbers and most important if a sow with cubs is visiting the site so that once his clients begin to hunt he can use this information to his and the hunters advantage. Your outfitter or guide must also ensure that baiting begins well in advance of your arrival so that your prey feels comfortable around the site and knows full well that there will be food there at the feeding time of their choosing. Craig Pomeroy of Hinterland Outfitting Limited does all of these things and so much more. He is the reason why I have killed nine bears in Newfoundland in my last six hunting trips there. Bear hunting over bait without a great guide is like a prizefighter without a great trainer to tell him when things are going well, and more importantly, when things are not working and change is needed. 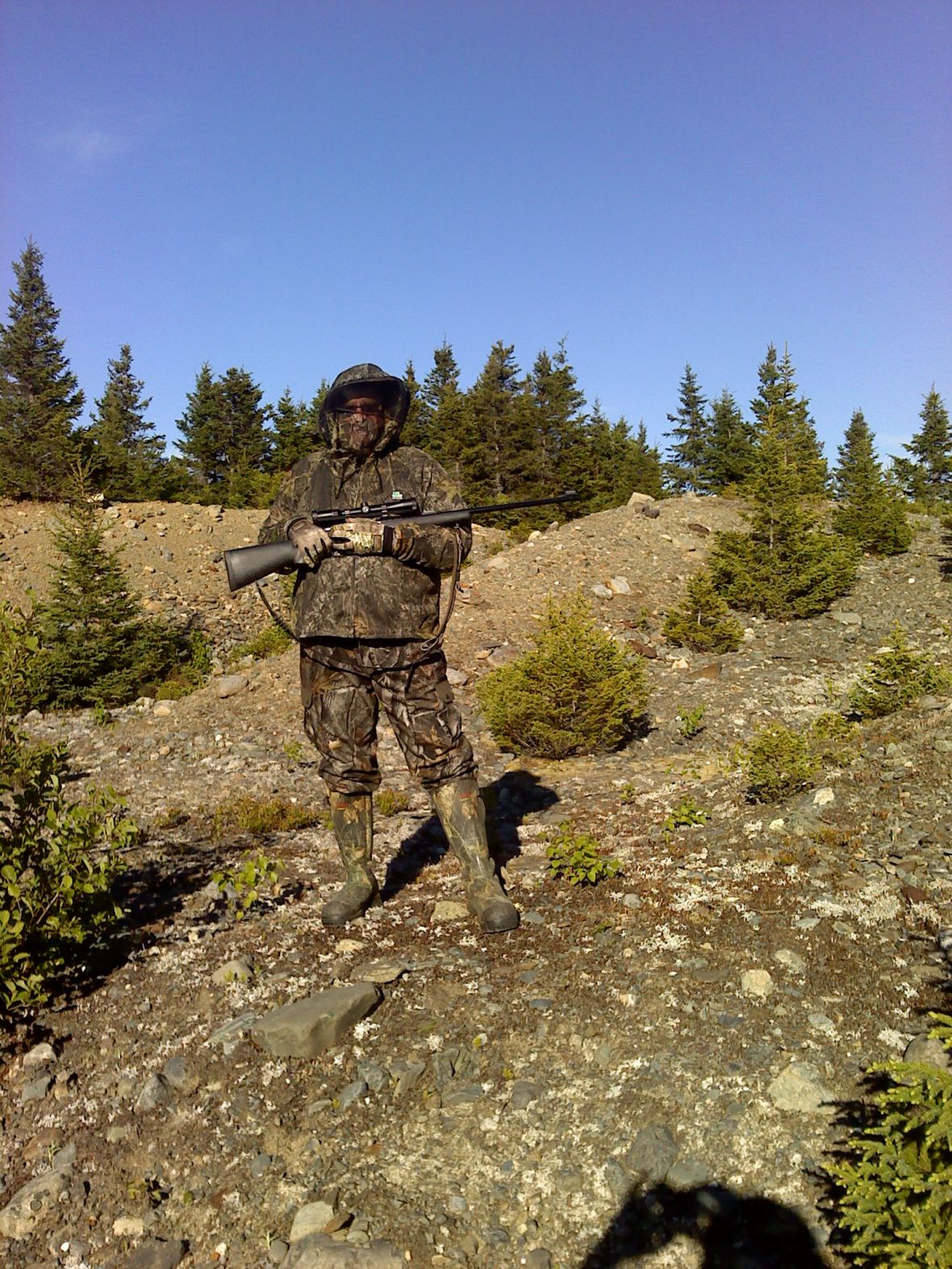 Monday came very fast. I slept longer than usual but still ate a great breakfast prepared by Craig’s wife Alice who does the camp cooking. While bear hunting you are on the stand during regular supper hours so the bigger meal of the day is prepared at 1:00pm. Alice served barbecued pork chops, salad, baked potatoes with mushrooms and onions. I ate heartily and after a brief rest to let the meal settle I headed to the washroom to shower and prepare for the evenings hunt. Craig likes to place hunters on their stands by 4:30pm thus we leave camp by 3:30pm. I showered using scent free Dead Down Wind soap and shampoo and finished by brushing my teeth with Dead Down Wind scent free tooth paste. I came directly from the shower and into my room dressing in my Scent-Loc clothing that I had carefully prepared at home and vacuum packed in plastic bags. I always take extra care in the protection of my hunting clothes taking as much precaution as possible to keep them scent free. I feel this is the most important aspect when bear hunting and contribute a large part of my success to this. I even wash my boots and back pack with scent free soap prior to leaving for my hunt and pack them in plastic.

My first day of bear hunting June 22, 2015 from my ground blind was “almost” uneventful as I did not see any bears during good shooting light. This was no doubt due to my own clumsiness because around 5:30 pm as I leaned back in my chair I fell backwards tipping over. I attempted to get back into position as quietly as I could but I made more noise than I wanted to- certainly more than enough to alert any bear in the area of my presence, I had violated one of the most important rules of hunting- no moving and absolutely no noise at all. As darkness began to set in for the evening at 9:45pm, I was getting ready to depart my stand when I took one last look at the barrel and briefly saw a bear go by, but just as suddenly as it appeared it was gone! I continued getting ready to depart but within seconds there was tremendous noise in the brush below and in front of me heading in my direction and I shouldered my rifle immediately. To just shoot in the direction of an agitated bear would have been unethical and stupid. I knew it was a bear and it was now close enough that I could hear its breathing but could not see it so I waited. It stayed in position and feeling unnerved, with my legs like jelly, I did likewise. I feared taking my hands off of my gun to locate my flashlight which was in my backpack as I sat only feet from the edge of the brush. Our standoff seemed like hours but at 9:15pm Craig walked in to see what was going on. Since I had not shown up at our appointed meeting place on time Craig had a hunch something was wrong and decided to walk in to check things out. I would be lying if I did not say that seeing his flashlight and hearing his voice, felt like I won on a lottery ticket. “What’s wrong?” he asked. “There is a bear right there” I said pointing, “Where” “Right there in front of us” I said. He very quietly told me to make sure the gun was on safety pick up my things and follow him out. When we returned to camp, Craig informed me that the bear was probably challenging me to let to me know he was aware of my presence.

The next day, after carefully ascertaining which way the wind was blowing, Craig decided that I should return to the same stand. Of course, I had serious reservations about this, but I remembered the old maxim-"Never guide the guide." On Tuesday, June 23, I again found myself sitting at the same ground blind with the terrible feeling that I had spooked away any bears for a long time, but I knew this stand well and anything could happen, after all I had killed five of the eight bears I had ever taken here.

At 6:00 pm it happened suddenly and without any sound, a large bear appeared to the right of the barrel and much to my surprise a second smaller one was tagging along behind!  I knew from its size that the smaller one was not a cub as it looked to be about 150-200 pounds. As both bears neared the barrel the bigger bear suddenly turned around faced the smaller one which promptly turned and disappeared from my sight. The large bear then continued on its beaten trail towards the barrel and stepping up into the opening where it was located, it presenting a perfect broadside view. I immediately placed my CZ375 H &H on my Vanguard Pro T68 tripod, placed the crosshairs of my Zeiss scope behind his shoulder and fired. The bear went down at once but I could still see movement so I fired another shot at its head for good measure. I was told to keep shooting if the bear keeps moving but I didn’t think the second shot was necessary. I was elated! As much as I wanted to go down and see my bear I stayed in my stand as I was told, to wait for Craig. He wasn’t far away and I knew he could hear my shots and would soon arrive on scene. I was even more surprised when less than five minutes later, the other bear appeared at the barrel, from the rear on its left side and facing in my direction. It was sniffing the ground completely unalarmed so I placed the crosshairs between its eyes and fired. It went down in a split second and didn’t move. I had just killed my tenth bear and I was thrilled with excitement! I had waited for so long for this moment! Within ten minutes I heard the approaching ATV and Craig arrived “what’s all the shooting about” he asked. “Look by the barrel and you’ll see” I replied. “ jesus that’s two bears you got killed, come on lets go down and take a look” “Do you think it’s a sow and a older cub” I asked. “I don’t know but I hope not” he replied. We approached the two bears and Craig reached down on the first bear I had shot and picking up a hind leg looked and said “this is a male here thank God”. He checked the other which turned out to be a female. We spent the next hour taking pictures and then Craig backed the quad and trailer in and we loaded both bears into the trailer on top of spruce branches to prevent any rubbing of fur against the cart on the way back to camp.

Once back at camp Craig weighed both bears before cleaning them, the larger bear tipped the scale at 340 pounds while the other weighed in at 157 pounds. He propped them both open we let them lay until morning to begin skinning them. I slept in until 9:20am and when I came outside Craig had already finished skinning the large male except for some final precision work on the head. I apologized for sleeping late and not helping but Craig said no problem. Craig finished the male and both of us began skinning the smaller female with Craig on the knife and I holding when needed. Once this bear was finished we draped the hides over the fence for an hour to dry slightly. As we let them dry we began processing the meat from the two animals. My outfitter cut out the choice cuts along the back and deboned the front and hind quarters. Unfortunately for me there were some parts of the animals that could not be salvaged due to damage from my bullets. The quarters were cut into roasts size portions for me and we placed everything in plastic bread bags and put them into two deep freezers located in his meat shed. As soon as the hides were dry enough we labeled them with tags that came with my license so that the taxidermist would know who owned them, we did likewise with the two skulls that would be turned in to the local wildlife office. There they would be cleaned, a premolar tooth removed for aging, and then returned to my home address, all free of charge. We put the hides in the bottom part of the deep freezers with the meat in racks on top. Craig would be sending me the meat via the airline once I returned home and could retrieve it from my local airport. 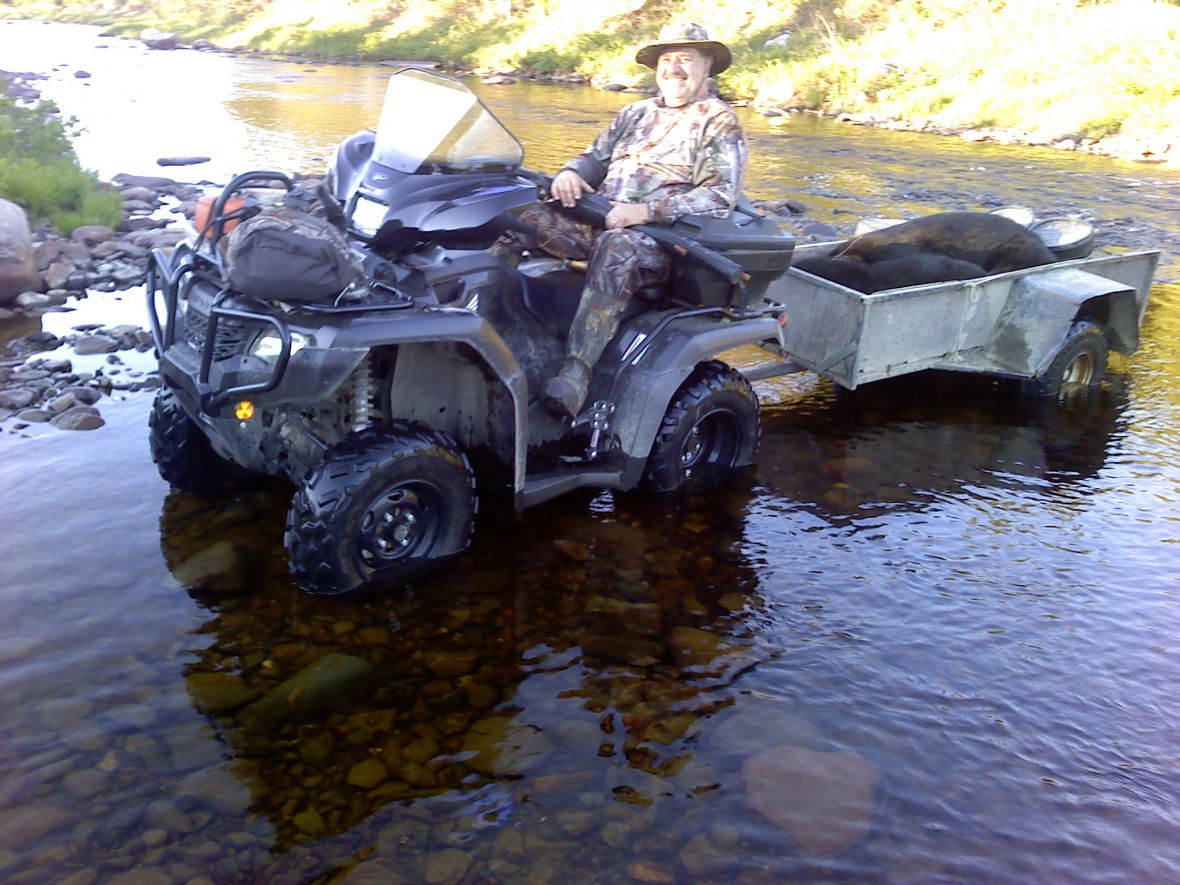 Not being much into fishing I spent the remainder of the week around the hunting lodge helping Craig with various jobs he was doing around camp. The weather remained the same throughout the week with daytime highs in the high teens and low twenties Celsius. We saw very little rain, only the brief shower here and there, a welcome change from some other years. It was one of the better years I had seen for flies or lack of them. I guess that could be attributed to the low unseasonable temperatures. However both days on the stand I did wear my camouflaged bug jacket which I purchased specifically for this hunt and was glad I did.

As I sit and write I am already thinking of next year when I hope to bag both my eleventh and twelfth black bears. I already have dates set with Craig but might, just might, for a change do my hunt a little earlier. I will take a wait and see approach on that and seek my black bear outfitters advise before I do.