You Had to be There-A True Newfoundland Moose Hunt! 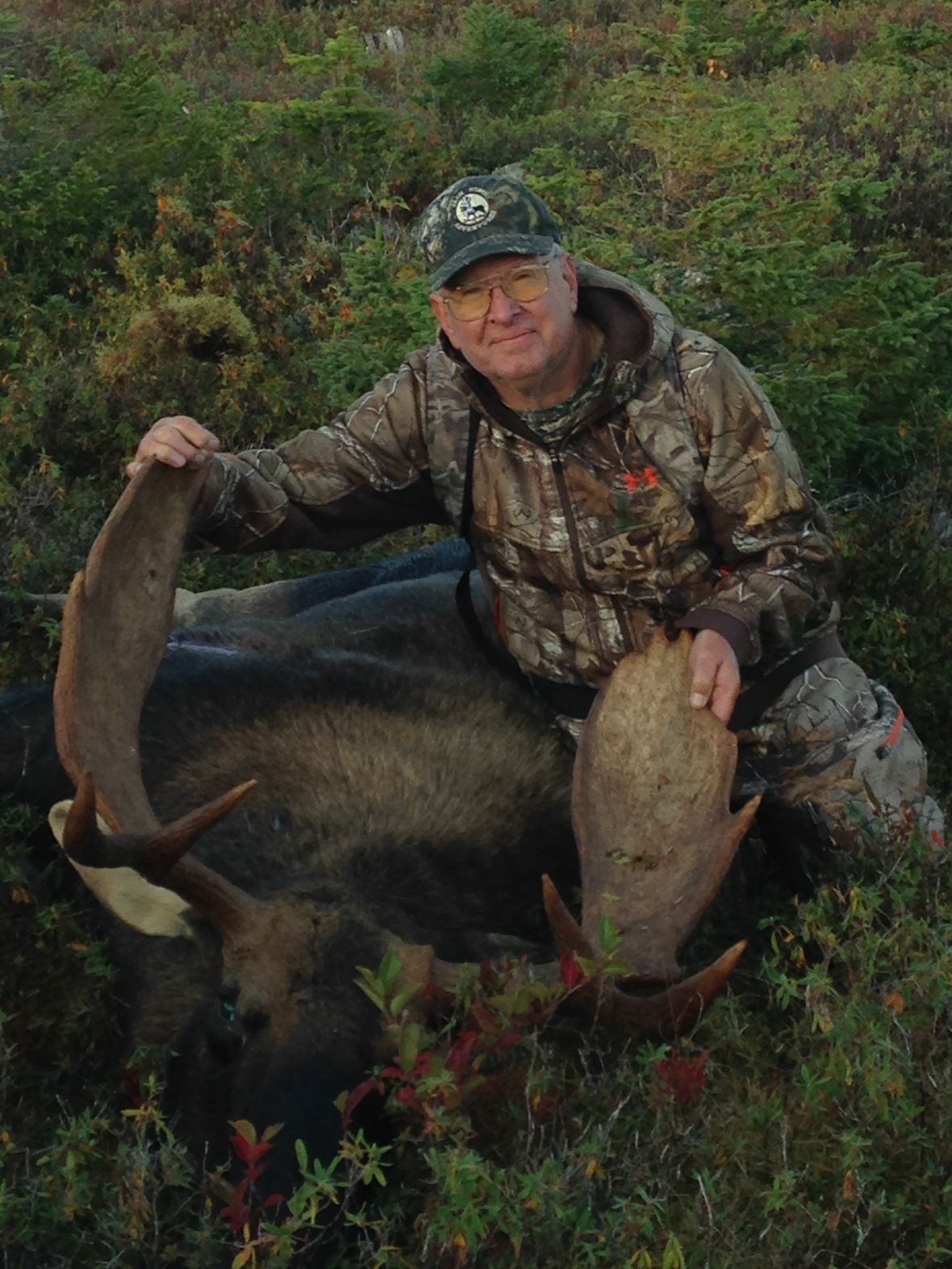 It all came to me one day while out deer hunting. I had sat down with my back to a tree in a prime location where there was ample signs of deer. However, as I patiently waited my mind wandered and I began thinking of my early days as an Apprentice Machinist working for the Tennessee Valley Authority and traveling to Wisconsin to take training on how to work on Turbine and Generator Governors. It was there I met another trainee, Clayton Mantaque from Labrador, who worked at Churchhill Falls Hydro Plant.

I learned that Labrador is part of the province of Newfoundland and Labrador, which is really two separate landmasses, but both fall under the same government. Newfoundland is a very large island in the Atlantic Ocean on the very eastern part of North America and Labrador is a portion of the “mainland” adjacent to Quebec; however its size is greater than that of the island. Labrador was once known for its huge barren ground caribou herd that measured 750,000 animals, it now measures just 15,000!

While training with Clayton I heard many stories about Moose and Bear Hunting in Labrador and Newfoundland, and I even got an invitation from Clayton to travel to Newfoundland to hunt with him, but at that time I couldn’t find time to go.  Over the years I lost touch with Clayton but the thought of hunting one of these creatures stirred my insides and soon my mind was made up, I was going to go moose hunting in Newfoundland.

Back at home later that evening I called my long time friend and hunting companion Ralph Gillispie to see if he might be interested;

“Sure why not” he beamed over the phone.

Surfing the net we quickly came up with some Newfoundland outfitters and upon contacting them over the next few days we choose Craig Pomeroy who owns and operates Hinterland Outfitting Ltd out of Bishop’s Falls.  When we contacted him he was nearly fully booked but we managed to get penciled in for the week of October 5th-10, 2015. It was us two and some four guys from Ohio.

We all arrived at camp on Sunday evening in our tee shirts believe it or not, what the heck I thought it wasn’t this warm home in Tennessee. After supper we sat around and listened while Craig and the guides informed us that hunting had been hard the previous weeks most likely due to the unusually warm weather. However I had come here to hunt and that’s what Ralph and I were going to do. We both purchased a moose license and a chance encounter black bear license.

The guides were finally assigned and my guide turned out to be a guy named Joe who age was 69, but you could have fooled me I was thinking early 50’s. He was a retired school teacher, part time musician and now worked as a tour guide during the summer months. He like most Newfoundlanders had hunted “all his life” and had been with Craig for many years.

The next morning after a great breakfast I walked outside with my hunting gear and Joe pointed me to his new ride, a Bombardier side by side complete with roof and windshield.

“Put your gear in the back and jump aboard” he said.

Heading out with headlights on Joe drove slow much slower than all the rest of the guides who were on ATV’s, which was just fine with me;

“Were not going far and we got lots of time, we don’t have to get there till daylight” he said.

Twenty minutes later we arrived on site just as the sun provided enough light to shoot and Joe killed the engine;

“Come on we travel on foot from here” he whispered.

We walked for about 15 minutes and Joe stopped,

Joe called and we both sat and listened, nothing. After 15-20 minutes had passed Joe called again and very shortly afterward he quickly turned to me and whispered,

“I thought I heard something” I replied.

“I’m pretty sure that was a bull moose”

We waited patiently for what seemed an eternity when a noise further up the road caught our attention. We both turned at the same time and there coming right down the middle of the road was a black bear about 75 yards away. Not knowing what to do I turn to Joe for advice?

“If I were you I would shoot. Its only Monday morning and moose are a lot easier to get then a black bear. It’s not like you’re going to them every day”

That’s all the encouragement I needed. I raised my rifle to my shoulder, took aim and fired.

Click was all I heard, a misfire, I quickly chambered another round but by now the bear was onto us and was standing in the road. I aimed at its chest and fired. Bang! The bear dropped to the ground and began spinning around shaking its left paw.

Taking aim I fired, Click! I heard Joe swear, a thing I learned as the week went by that he seldom did. The bear now regained its balance and with a couple of bounds disappeared over the bank out of sight. I snapped a quick shot at him as he did but did not think I touched him. I was now out of bullets so I reached in my pocket for more bullets while Joe stood with his cap in his hand staring at the road where the bear had been standing. The look on his face said it all.

“I know you hit him but I don’t know how good” he said.

My mind was blank; here I was a highly certified machinist; for crying out loud I had just built a fully operational gatling gun. Reloading ammunition was something I had done a thousand times before without any issues, why now?

“I’m shaking that much now from the excitement I don’t know if I could shoot a moose now if a hundred was in front of me” was all I could say.

Joe was looking over my shoulder and I could tell by the expression on his face something was up.

“You had better find out if you blessed well can” he said “look right there, here comes a dandy bull moose”

I thought he had to be joking but when I turned around sure enough here was what I had come to Newfoundland for. I completely forgot about the bear I had just shot at and wounded and centered my attention on the bull moose.

“I’ll get him to stop and when I do you shoot it’s only a 100 yards away” Joe whispered.

I couldn’t understand why he was whispering because I had just fired two shots, chambered four rounds, and yet the moose was coming across the cutover right towards us. This moose obviously wasn’t afraid of noise.

Joe called and the moose stopped broad side. I aimed, holding my breath hoping this bullet would fire. Bang! Thank god! The moose turned and stumbled heading for the timber it had just exited from.

Now shaking I pulled back the bolt and jammed it forward. Taking aim I squeezed the trigger. Bang! The moose lurched sideways and crumbled to the ground. We stood where we were and waited but it soon stopped moving. We approached it and once sure it expired Joe said,

“Come on we have to have a quick look for that bear before we clean it up”.

I reached in my pocket for a tissue and raised my hand to my face to remove my glasses to clean them and it hit me. I had placed my Go-Pro camera on my rifle barrel before leaving the bike but in all the excitement I had completely forgotten to turn it on. 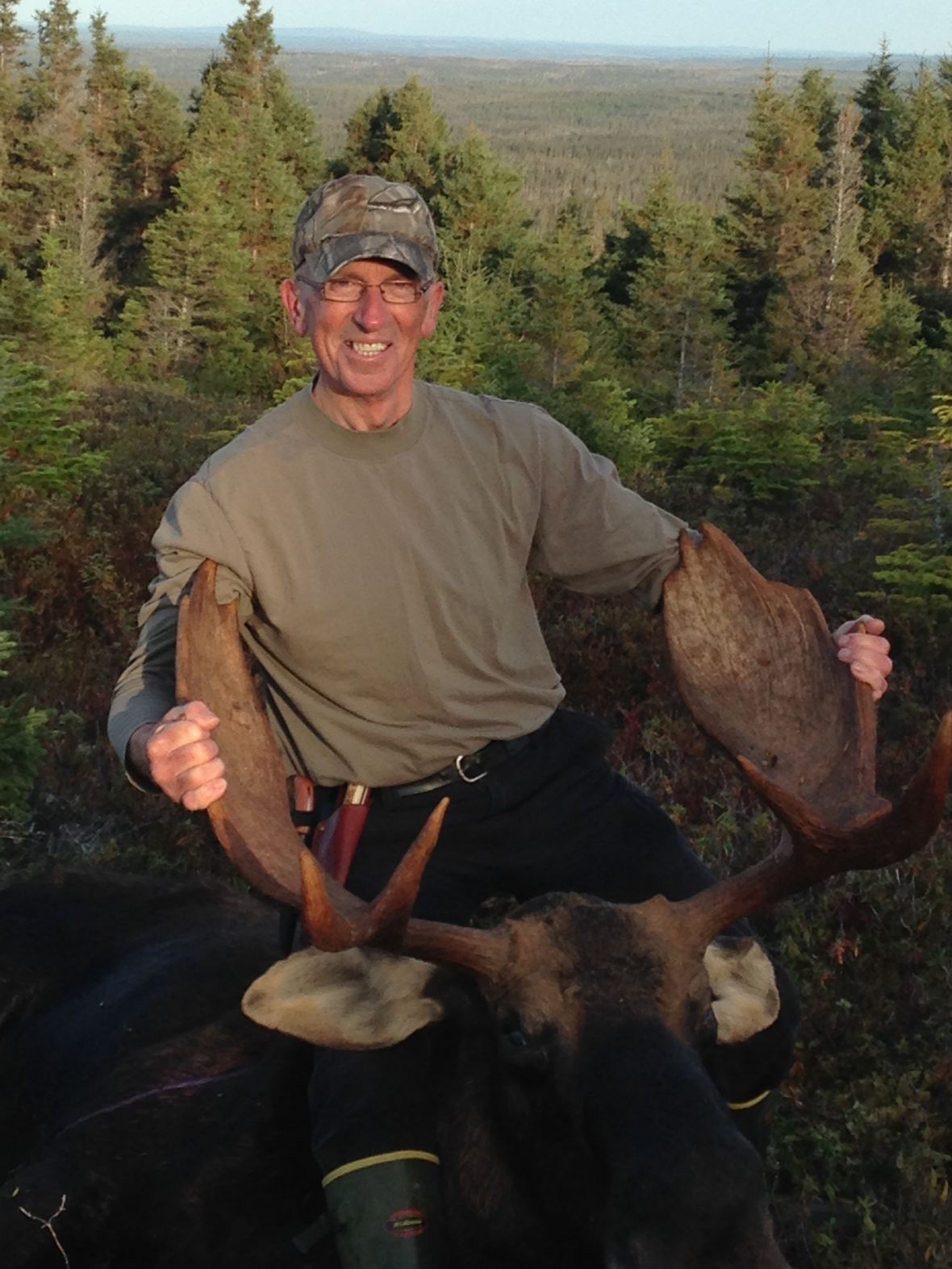 We walked across the small cutover unto the road and quickly found where the bear had been standing. There was some blood, what looked like a piece of bone but no bear. Unfortunately for me we scoured the area but could find no other trace of the animal. We even came in later that day with my buddy Ralph and his guide and looked for two more additional hours with no luck. I later determined that the bullets were not at fault and the problem was in the firing pin mechanism.

The rest of the week went well and Craig and his guides ended up getting five out of six moose for the week. Everybody was pleased so before we departed camp both Ralph and I spoke with Craig and now we are already scheduled to return for the 2016 hunting season. The guys from Ohio, who we became great friends with before the week ended, were tossing around dates for 2017. Who knows we may try and arrange to be in camp with them again that year if there’s room?