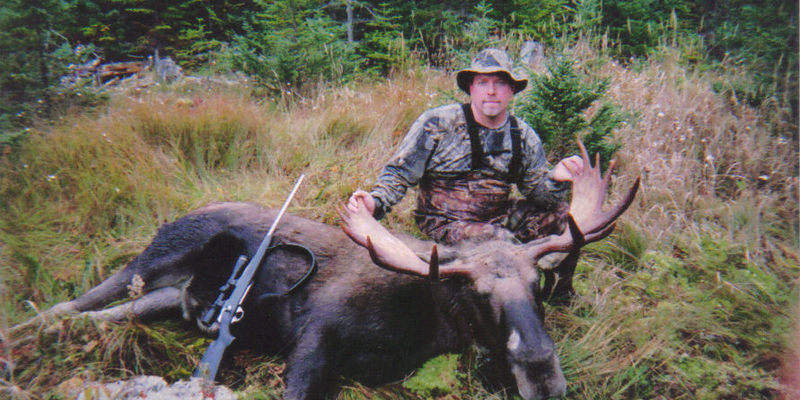 As an outfitter and dealing with lots of hunters and fishers you get to see many things and hear many stories, some of which makes you highly skeptical of their authenticity, a common thing with so called stories from both sides of the fence, but after seeing what I consider to be “just about everything” I can  relate to most. This is a true story that happened to me and a fellow hunting guest.

In 2004 I booked a group of three hunters (Art, Paul and Ron) from New York for the week of October 11-16th to do one single woodland caribou hunt and two combination moose and woodland caribou hunts.  The trio arrived in Gander, Newfoundland late on the night of October 10th, but I picked them up at the airport anyway and drove an hour back to Bishop’s Falls where I dropped them off at a local motel where they would be staying for the night.

The next day we left to go into camp around noon and once arriving had a great meal, completed our licenses, decided whom would be hunting with each guide and prepared to get ready for hunting the next morning. I had Paul who was hunting both moose and caribou. From my conversations with the trio over the winter, I deduced that they were all experienced hunters, or so I thought!!

Monday morning soon came and after eating a great breakfast prepared by my father Bill who performed the camp cooking, Paul and I departed on my ATV for my chosen hunting spot. The weather wasn’t the best with light drizzle and fog. I was heading to a favorite moose hunting and caribou hunting spot of mine where it was common to see both moose and woodland caribou in the same location, a huge bog system with tuckamore along its edges. Often time’s trophy Newfoundland moose and trophy woodland caribou could be seen there so it was a staple hunting spot of mine, even though it was a hard walk, for it was all bog and uphill to boot going in.

“What the heck it’s only Monday morning, let’s go and take a look” he said.

Parking the ATV we began walking quietly along the old logging road looking for tracks and listening for any signs of moose. Almost near the end I suddenly heard a cow moose “calling” off to our left in young growth a “good ways” away. We waited, listening to her continue calling.

“I’ve got a trail that goes right up there, let’s take a walk up and see what going on, there might be a bull in the area” I said to Paul.

Taking our time we slowly made up the ground between us until finally I spotted the cow in a small clearing.

“There she is” I pointed.

We watched the large mature cow, feed and then call, for about five minutes from a distance around 200 yards away, when the answering grunt of a bull interrupted her routine.

“You hear that Paul, that’s a bull up there somewhere”

Glancing at the cow I could see that she had heard the bull too but to my surprise she turned and began to walk away, obvious not in full heat.

“Get ready Paul that bull is following her for sure and he’s going to walk by right where she was standing. When he gets in the opening I am going to call and get him to stop so that we can take a look at him”

The misty rain and fog made it hard to see clearly but without warning I could see antlers over the tops of the young growth.

“There he is Paul and he’s definitely a shooter, get ready” I whispered.

As the huge bull moose entered the clearing I called and he stopped immediately turning his head in our direction.

I stepped to the side watching the moose and covering my ears. Nothing!

“He’s right there” I said pointing.

“It won’t come off its inside”

“Well you had better do something or he’ll be gone” I replied.

Paul fiddled around for what seemed like hours but eventually said

Paul put his gun to his shoulder, took aim and pulled the trigger. The morning silence was shattered with the repercussion and the muzzle break on his gun seemed to make it louder, but much to my amazement the bull crumbled to the ground instantly.

“Jesus you got him” I uttered, “that was an excellent, excellent, shot”.

We waited to see if the moose would get up again but it never did so we walked up to where it was laying. Expecting to see it stone dead I was confused when it came into view and I could see it just laying there. Its head was up and it was fully alert staring at us, definitely not shot in any heart or lung area.

“You’re going to have to shoot him again” I said “but don’t ruin the cape if you are having a moose mount made, shoot him in the neck”

Another shot and the moose lay dead. We took pictures and I began to paunch the moose. I looked everywhere inside the body cavity and on the exterior but could find no bullet wound.

“I think he died of fright” I jokingly said to Paul.

Once we had retrieved the moose and had it back at Hinterland lodge to skin it, I solved the mystery of what had happened. As I removed the skin from the hind quarters I discovered the “excellent” shot Paul had made was not so “excellent” at all. Paul’s first bullet hit the moose square in the spine about an inch inside its tail paralyzing its back legs.

I looked again and again at the wound but knew it had to be Paul’s first shot, however in my mind I was thinking how in the hell could anybody hit an animal as big as a 16 point Newfoundland moose there when he was shooting at the heart and lung area. Thinking of the foggy scope and distance eased my mind somewhat but I kept thinking maybe he’s not such a good shot after all, it was something to keep in mind if and when we saw a woodland caribou.