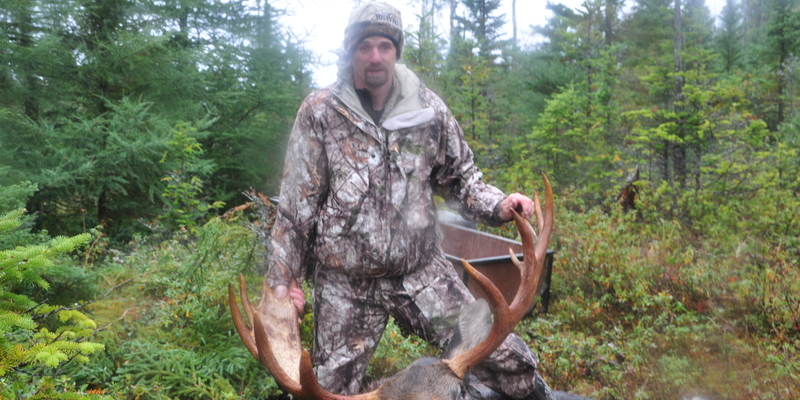 Hinterland Outfitting Ltd. is comprised of a great group of down-to- earth folks and that’s about all I can say. This was my first hunt using an outfitter and so of course I was a bit apprehensive as was my girlfriend who came along with me to get away from her stressful job. All my past hunts were self-planned hunts and all were undertaken out of a tent. Hinterland Outfitting definitely set the bar extremely high for any other outfitters I may use in the future. The owners are very friendly and try their best to keep everyone safe and comfortable.

The camp is very accommodating with plenty of space. The food is unbelievable with three square meals a day; if you leave the table hungry it’s your own fault. My girlfriend who didn’t hunt on this trip was definitely able to relax by reading, bird watching, and photographing nature around the cabin and nearby lake.

The hunting guides at Hinterland Outfitting are great; they know moose hunting and caribou hunting. The guide I had definitely had his work cut out for him because I had a tag for both a Woodland caribou and a moose and besides that Mother Nature was definitely not cooperating as it was unseasonably hot both at day and at night. I would have liked to have hunted in shorts and a tee shirt but the terrain we were hunting in wouldn’t allow it. I kept thinking why would a moose or a caribou want to move when I didn’t even want to move?

Monday we hunted hard but with no luck. Several of the other hunters in camp saw animals but not us. On Tuesday our luck changed, we had several cows calling and one bull came in to about 60 yards but I was not able to get a shot at him. As the animals appeared to be held up my guide and I spent a lot of time walking trying to dislodge any moose from its resting place, covering many miles. We walked trails, roads, river beds and even bogs. Just about everywhere we went there was fresh sign of animals and we deduced it had to be night time movement when the temperatures did drop naturally by a few degrees. I think I wore three pairs of boots out, well not really but being from Pennsylvania, USA and not being used to wearing knee-high rubber boots, I was getting blisters. Eventually I figured out how to avoid the blisters by putting as many socks on as possible to keep the boots tight to my feet. Yeah, I would highly recommend a good fitting pair of light weight knee-high rubber boots to keep your feet dry and comfortable.

I don’t think we saw or heard another animal until Friday morning though we hunted hard every day. On Friday the temperature dropped to near normal temperatures and it was like a light switch went on in the animals. We had a cow in about 30 yards right at daybreak. Then we moved into what my guide referred to as his “honey hole”. As we crested the top of a mound, we could hear the moose calling all around us. We slowly snuck up to where the moose were calling. My guide made a few calls and raked a tree a few times and a cow appeared 40 yards below us, and then another. After a time, they finally lost interest in us and seemingly having enough of us they left. Shortly after that, I could see a set of moose antlers and patches of fur through the brush off in the distance moving left, but could not get a shot. It was silent for a while and then suddenly another bull appeared straight in front of us up on a little hill. I could only see his rear end and his antlers but as fast as it appeared it too disappeared into the brush without making a sound. Dexter quickly took the antler he was using to scrape with and began scraping on a young fir tree. He made several low calls.

With my excitement level on near bust we held our ground and waited knowing we were right among several moose. Then minutes later, we could hear raking to the right of us and it wasn’t far away.

My guide said “get ready I think he’s coming”.

Oh yeah, he was covering ground and making a lot of noise while coming in. My guide and I quickly realized we were in trouble because we could only see maybe 20 yards to our right.  So we silently moved back about thirty yards where I had a small shooting lane. The bull made his way up to the opening and stood what seemed like a lifetime one step from giving me a shot.  Finally, he took the step and I was able to take him. We cleaned the moose, covered it with spruce trees and returned to camp. After lunch we returned along with one other guide and his hunter who helped us cut a trail to my moose and get it safetly back to the road. What a great experience that was! 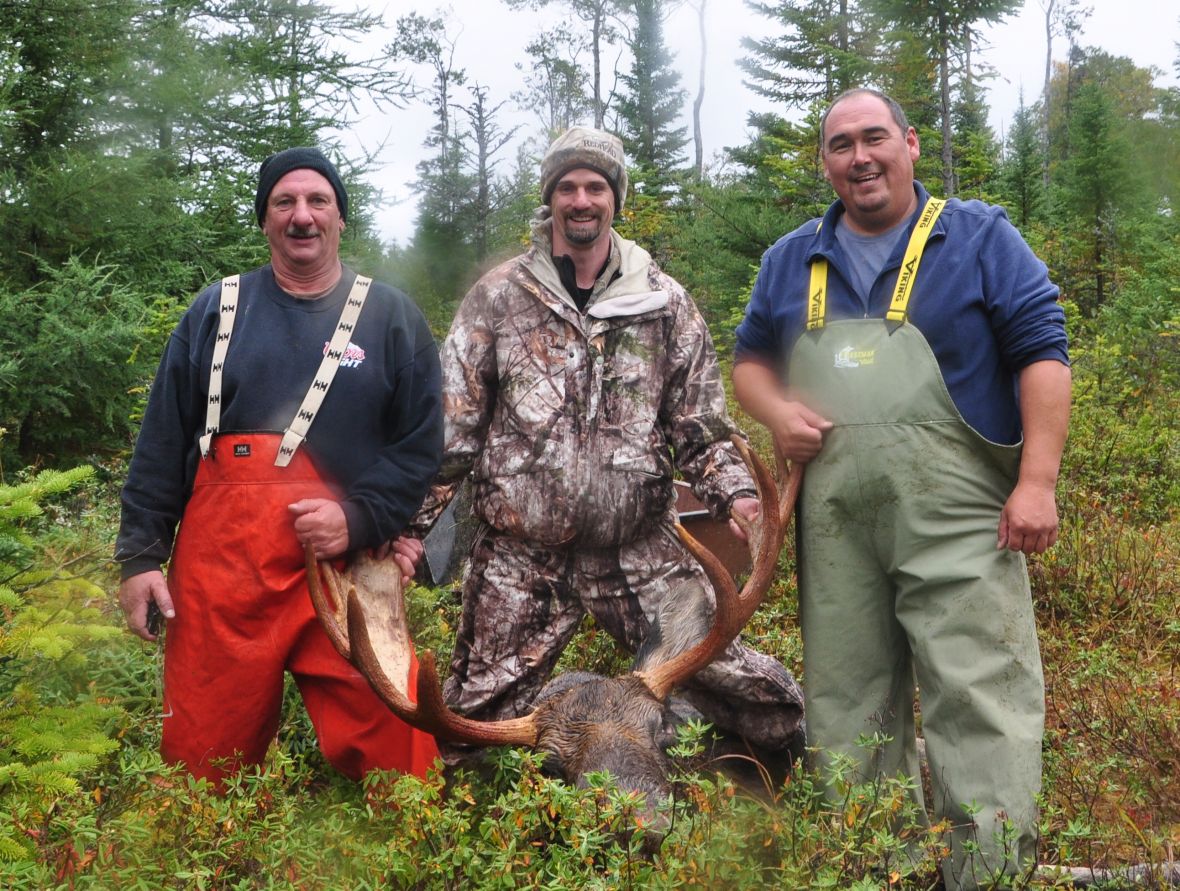 We only had a few hours left to hunt Saturday morning for a caribou as everybody breaks camp around 2pm. I believe everyone in camp had seen caribou up to this point except me but none had a permit to harvest one. I was happy just to be hunting and I was extremely happy to be taking a moose home.  I figured destiny was set and I wasn’t supposed to see a caribou. But I wasn’t going to give up and neither was my guide. My guide and I crossed some caribou tracks about an hour after daybreak.

He looked at me and asked “what do you think, they look like this morning’s tracks to me don’t they”

We walked a little over 100 yards up the old skidder trail the caribou had taken when Dexter grabbed my shoulder and pointed.

“There he is right there” he said.

I couldn’t believe my eyes but yet there it was, a beautiful adult stag caribou; the icing on the cake if I could make the shot. I knew we weren’t going to get much closer as the caribou had already turned and was looking at us. It was about a 175 yard shot and I knew it was now or never. I had made a shot like this many times before so I steadied my rifle on a small tree, took aim and squeezed the trigger. My aim was true and the caribou lurched forward several steps and stopped, obviously hit.

I placed the crosshairs back on the caribou and fired again. This time the animal crumbled. We quickly took some pictures and Dex phoned back to camp to alert the rest of the crew to my success. Before we had everything done we could hear an ATV coming in the distance. It was two other guides with a cart for the caribou. The boys quickly cut a trail to the caribou and loaded it aboard. We got it back to camp, cleaned it and cut it up so I could get it in my deep freezer and still got out of camp on time. I was amazed. 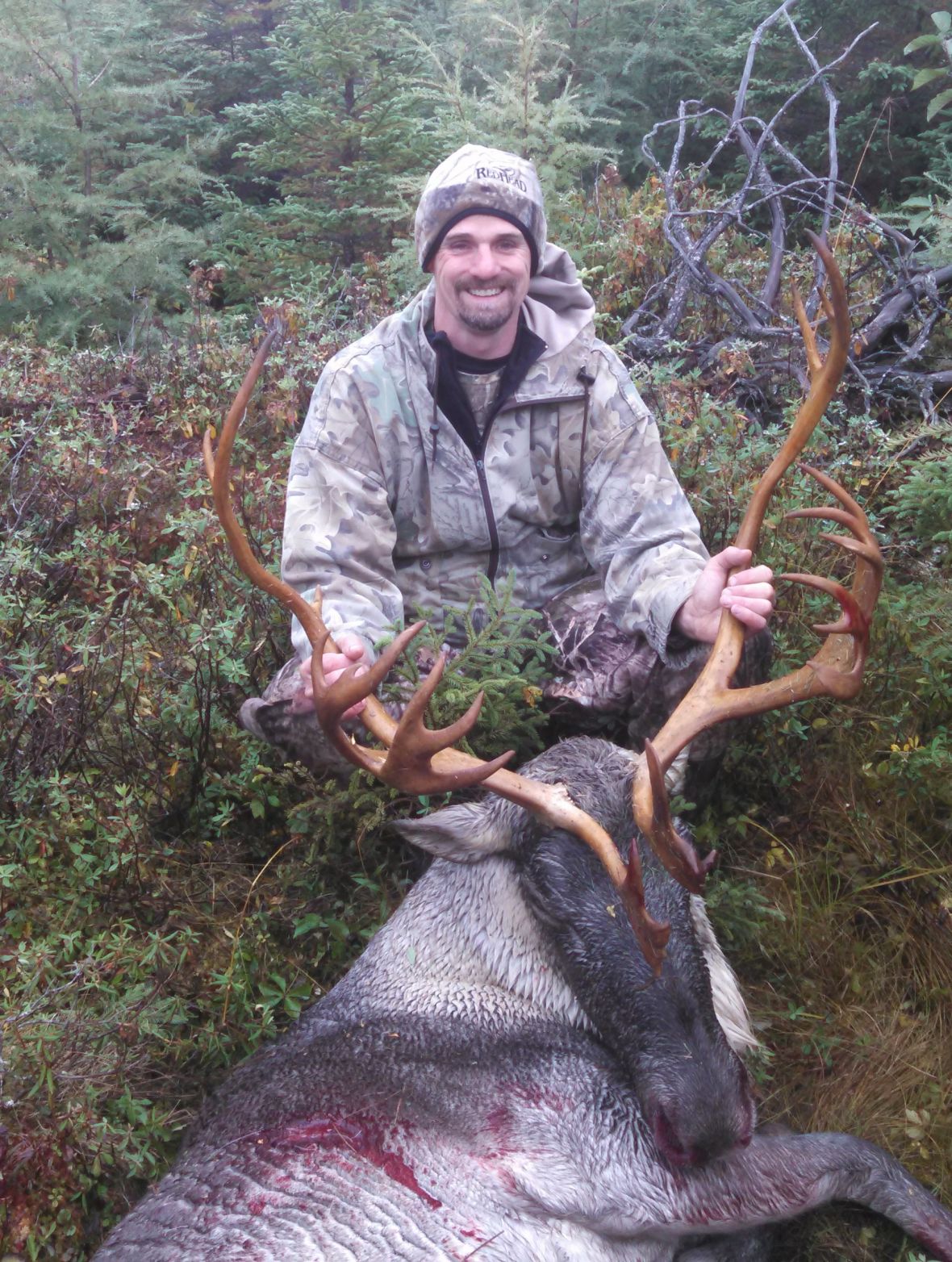 I spent a lot of time researching guides in Newfoundland and didn’t really believe the success rates most outfitters were quoting but let me tell you, Hinterland Outfitting Ltd. is not stretching the success rates. I saw six bull moose and as many cows. Most everyone in camp successfully got a moose that Friday or had the opportunity to harvest one. I went to Hinterland Outfitting as a client and left with a bunch of new friends. My girlfriend and I are already planning our return trip.