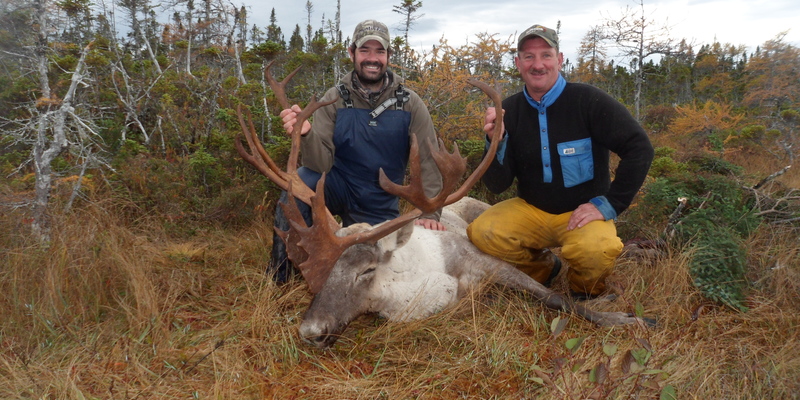 It all started with an email to Craig Pomeroy owner of Hinterland Outfitting Ltd. in Bishop’s Falls, Newfoundland in early February, 2011. I’d come across his website while surfing the web looking for a Woodland Caribou hunt. What I was doing I had no idea, here I was living in Alaska home of thousands of caribou, several of whom I had just harvested on my local permit along with a local moose, and I was seeking to do another caribou hunt on the other end of the continent. What the heck I thought to myself, I loved hunting and could get time off work, so agoin’ I was if I could get a permit in Newfoundland.

Craig quickly responded to my email informing me that he still had one caribou permit remaining for the fall of 2011 and looking at the price and what was included I promptly emailed him back and told him I wanted it. I asked several questions that came to mind including the amount of deposit required and he answered all to my satisfaction. I asked him to email me some pictures of caribou that had been taken the previous year at his hunting lodge and when I received them and looked them over, I was impressed.

I arrived in Gander on a late evening flight from Halifax on Saturday October 15th, a quick call for a taxi and I was at my hotel where I was staying for the night in less than ten minutes. My Newfoundland outfitter had agreed to pick me up the next morning around check out time and sure enough I didn’t have long to wait once I got my hunting gear out of my room and downstairs in the lobby.

A suburban with two guys aboard and a pick-up truck following behind pulled up in front and it seemed as if we had known each other for years as Craig came through the door grabbed my hand and said “hello Matt I’m Craig, that’s one of my hunting guides in the sub with me, his name is Dexter and the guy driving the truck is our cook, Mike.” We loaded my hunting gear in the rear of the suburban and after a brief stop to pick up a few spirits we headed in country on a well maintained gravel road. Two hours of driving and the road deteriorating with every mile, across numerous rivers, some with bridges and some without brought us to the end of the road via our trucks, apparently it was ATV’s or walking only from here to get to the hunting lodge. When the lodge came into view I was awe struck, how the hell did he get all the material required to build this place way the darn back here. The “trail” which seemed nearly half a mile long had been made by hand with shovels, picks, bars and chainsaws right through the middle of a mature forest by Craig, his father and some of his staff. I could not imagine even attempting it without the help of machinery, but they had done it one shovel full at a time.

We had a few drinks while we waited for supper and when the cook, Mike shouted out to us I was hungry, moose burgers and homemade fries, my type of meal. I mentioned just how good the moose was as I ate and asked what the deal was for hunting moose along with caribou. Craig commented that he had a moose permit left from a last minute cancellation. “Are you serious?” I said. “Yessiree you can hunt both if you like.” “Well I came for a caribou mainly, but let me think it over some” I replied. What was I going to do with a moose and caribou in Newfoundland; I’d just filled my freezers back home before I left with all the moose and caribou I could eat.

The next morning I learned that Dexter would be guiding me and not Craig. As soon as breakfast was over Craig brought out the caribou license for me to fill out but I had other plans. Before I fell asleep I thought about the moose permit, I’m getting that too I decided so I quickly obtained both licenses and filled them out, dressed and headed out to the ATV with my gun where my guide was waiting for me. “I’ve got both a moose and caribou license” I said. “Perfect” he replied “we can shoot anything we see.”

It had rained since the last time Dexter had hunted in where we were going so he suggested we cover some ground on ATV to see where the fresh sign was to. About forty minutes in an abandoned old logging road Dexter suddenly applied the brakes to the ATV, “hurry up and get a bullet in the gun there’s a bull right there on the cutover look” he pointed. Shit I couldn’t believe my eyes for there was a nice bull standing out in the open about 200 yards away. I got off the ATV, popped the magazine in my rifle took aim free hand and fired. Nothing. “Shoot again” I quickly took aim again and fired. This time the moose bolted straight ahead and disappeared from sight. “you hit him that time.” We walked up the grade and Dexter pointed out “there he is on the ground over there”. It was an eight pointer not huge but it was a respectable moose no less. I was standing back out of the way as Dexter began to get the moose in position to paunch it, “what’s that white up there on that bog that I can see Dexter.” I was looking at a bog about a mile away I guessed. Dexter took one look through his binoculars and said “that’s caribou and there is a great big stag with them, come on give me a hand to cut this moose open and we will get going before they move.” Dexter quickly cut the stomach open and rolling the moose on its side he cut the diaphragm and dragged most of the innards out of the body cavity. “I know right where they are to, let’s go” We nearly ran to the ATV, put on our helmets and off we went. Within minutes we turned off the road and entered an old trail where after five minutes of torture we broke out on a huge bog. Dexter turned right and staying in on the edge where it was dry we made good time down the bog and across a brook and up the other side. At least a half hour had passed since we had last seen the caribou so instead of walking we continued on the ATV to make up distance and time. We came to a crest in the bog and the ATV came to a halt, we couldn’t chance breaking out in the open on the bike. Ditching our helmets we neared the crest and looked over. There they were 250 yards away. “Can you hit that from here “Dexter asked? “Give me a spell to catch my breath and I can” The ten or twelve caribou didn’t appear to be going anywhere fast so I waited, catching my breath. “That’s a huge stag” Dexter said “don’t miss or your walking back!!!” I got in a kneeling position waited for my chance and squeezed the trigger. The huge stag crumbled from the shock of the bullet and I could clearly see him laying on his side kicking. “You got him” Dexter said obviously very excited. We walked to the downed animal and as I approached I stared in amazement. This stag had antlers as big as any I had killed in Alaska and its coat was magnificent. There was no doubt in my mind I would be having a mount made for sure.

By nightfall we had retrieved both animals from the field and had them cleaned and quartered. Seeing it was still only Monday I asked my outfitter what was I going to do for rest of the week. “I’ve got an active bear stand if you want to buy a bear license.” I did buy the license and sat through the rain and cold for four evenings but it was obvious after the first night that the bear or bears that I was hunting were smarter than me. Each day the bait would be gone when we arrived but even though I sat as still and quite as possible, I failed to catch even a glimpse of a Newfoundland black bear. Oh well two out three ain’t bad I thought to myself!!!